Feminism and lobola – can it work? Pumla Dineo Gqola tells her story at the launch of Reflecting Rogue 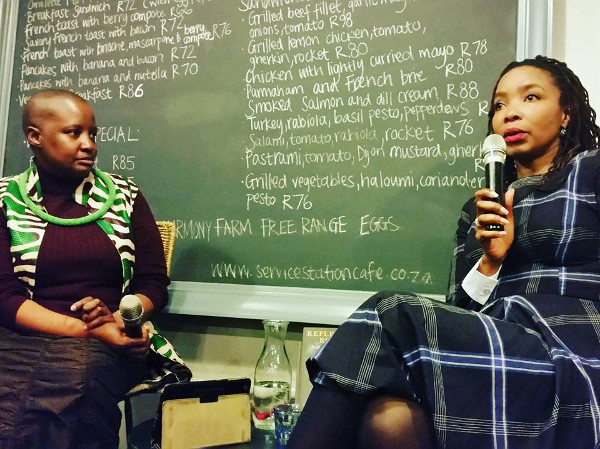 Gqola is a gender activist, award-winning author and professor of African Literature at Wits University, and is the author of three previous books: What is Slavery to Me?, A Renegade Called Simphiwe and Rape: A South African Nightmare.

The venue was packed out for the launch of her latest work, and Gqola signed copies of her book for over an hour.

Gqola was in conversation with Rosie Motene, and the two discussed many of the contentious issues that crop up in the book – including feminism and lobola.

‘Honestly, lobola is a mess,’ Gqola said. ‘I know that there are some feminists in my life who say “hell no, when I get married I want the lobola”, and that’s fine, if you can make it work.’

‘So how do you make it work?’ Motene asked.

‘I have no idea,’ Gqola said, to much laughter. ‘I have friends in the audience who have been married more than once and have tried different things, because it’s hard. It’s hard to fight with your family, when you’re family is saying, “no, you will do it”.

‘I certainly know that I resisted it, and I didn’t want to give in to it, and it was the worst thing I ever did to myself. And I knew it would be, going into it and saying “okay, I’m just giving in because I’m exhausted with the fighting, maybe I’ll just pretend I’m someone else …” But I don’t know how to be someone else. So it was a mess and it was damaging.

‘So for the feminists who can make it work, great, please let us know how you did it. I obviously can’t, and I’m not interested in trying.’

The joy at the launch of the new book by @feminist_rogue was palpable. She's one of our finest minds pic.twitter.com/bxuJ7V4jq7

Highlights from the launch of #ReflectingRogue by @feminist_rogue. Looking forward to reading this & possibly hosting a book discussion soon pic.twitter.com/BcMZPFZwNv

Watch a video from the launch: