Excerpt: Alicia Keys shares the private moment that sparked the viral #NoMakeup movement, in her new memoir More Myself
More about the book! 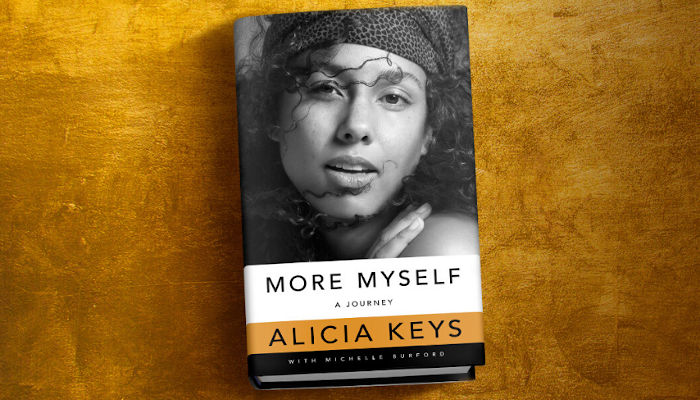 Pan Macmillan has shared an extract from Alicia Keys’s powerful new memoir, More Myself: A Journey.

Alicia Keys has enjoyed a phenomenal music career, selling over 65 million records worldwide to a legion of devoted fans. But despite her incredible success, she wrestled privately with a number of challenging and complex issues.

In the excerpt, Keys reveals her personal struggle with conforming to modern-day beauty standards and the moment of private revelation which sparked the viral #NoMakeup movement.

#NoMakeup began as a private revelation – one I sat with on the shores of Turks and Caicos. In 2015, Swizz and I travelled there to celebrate our fifth anniversary. We took little Genesis with us. Egypt, who was four, was off living his best life on a cruise with my mom, his Mimi. One afternoon while the baby was asleep and my husband was out, I sat alone in our villa, soaking in the peacefulness, gazing from the window at the shimmering aqua waters. I took out my journal and began to write. What spilled out was a more personal version of everything I was sick of – like the constant judgement of women’s appearances, which was high on my list.

The thought had been swirling for years, long before I scribbled it down on the list I’d made ahead of work on HERE. It had again resurfaced that spring. One afternoon, as I was preparing to pick up Egypt from school, I threw on some sweatpants and a baseball cap as an internal deliberation arose: What if someone sees me like this and asks to take a photo? And what if that picture gets posted? The dialogue wasn’t new. For more than a decade, my first thought, upon getting out of the shower, was usually, What can I wear that won’t cause too much attention? That was true whether I was planning to pick up my son or just going out to shop or work out. What was different, on this day, was that I caught myself in the middle of the neurosis, and it socked me right in the gut. I stopped, stared at myself in the bedroom mirror, and thought, What is the matter with you? What is happening right now? It was the first time I’d fully recognised how paralysed I’d become. And it wasn’t until I arrived in Turks, months later, that I got quiet enough to think through that realisation, examine it, and try to make sense of how I’d grown so concerned with what others thought of me.

I’ve been hiding for most of my life, in many ways. The animalistic stares of men along the boulevards of Hell’s Kitchen were what first drove me to cover up. I saw how they drooled at the women who pranced by in miniskirts and stilettos, how they undressed them with their gaze, hungrily eyeing their backsides. I noticed the raw desire in their eyes, their urge to lunge and grab what seemed theirs for the taking. It scared me. And in my baggy jeans and Timbs, I could escape notice. With my curls pressed down and tied away into a bun, there was no hint of flirtation, no provocation of fantasy. My loose-fitting sweatshirts became my uniform of survival, my safe place away from the prying eyes and whistles of strangers. There were no bright-red lips to draw stares my way, no formfitting dresses to display my curves and betray my vulnerability.

Fame brought a new form of hiding. The oversize jeans and tough accent got me labelled as hard. So again, I went underground, this time by easing out of who I’d always known myself to be and toward an apparently more digestible version. I traded the full head of chunky braids for cornrows in the front and hair down in the back. I changed how I spoke and eventually even found my way into some dresses. A lot of these changes were a natural evolution, just part of exploring and experimenting with different looks and growing into my full womanhood. But behind the shifting wardrobe, beyond the softening around the edges, there lurked a message: You are not sufficient as you are.

My industry reinforced that message. For every performance, every photo shoot and appearance, there’s an expectation of female flawlessness. Ahead of each event comes hair and makeup – and I’m not talking about some light dust of powder. It’s the works: heavy foundation, fake eyelashes and liner, three coats of mascara and lipstick. Creating this impenetrable armour of perfection is literally an hours-long production, and for my first fifteen years in music, I went through it nearly every day. The makeup would sit on my face for ten, twelve hours at a time, often under hot stage lights, always settling into every crevice of my face to clog my pores and lead to breakouts. My skin couldn’t breathe. In time, nor could I. When I’d come home from whatever event I’d had, I’d scrub off all that foundation, rip off the eyelashes, pull out my fake ponytail extension, and stare at my bare skin. Without the makeup, I no longer even recognised myself.

My anxiety over appearance also invaded my private world. Any mother can tell you that after having a couple of babies, it takes frickin’ forever for your body to recover; in some ways, it never fully does. For months after you give birth, you’re like, What happened? And how come I’m not bouncing back? Add to that having others seemingly fixated on every ripple of my skin, every hint of cellulite. While on vacation, I’d play on the beach with Egypt as some long-lens camera swooped in to capture a close-up of my abs. I’d find myself holding in my stomach, praying the images wouldn’t end up on some blog and go viral. They usually did. And though I know it’s a fact of life in my industry, it still felt mean and intrusive. Nobody is supposed to snap a picture of someone’s butt on the beach and then circulate that photo en masse. It’s not natural. In fact, it’s cruel. Meanwhile, because every model in every magazine spread is airbrushed to death, no one recalls what cellulite actually looks like. Women have loose flesh and stretch marks: that is the truth. And yet it’s the lie – the unattainable standard – that is peddled in its place. We’ve been sold this lie so frequently that it has altered our very way of seeing.

That head trip is what led me to think twice about doing what mothers all over the world do every single day: leaving the house, without makeup and in sweats, to pick up my child from school. On those occasions when I did roll out with a bare face and a baseball cap, I often declined to take photos with those who asked. When I’d reluctantly agree, mostly because I didn’t want to disappoint someone with a sweet spirit, I’d freak out for hours afterwards. What if the picture gets put up on Instagram? There were only two options for breaking out of my prison: to always leave my house ready for a close-up, which every parent can testify is impossible, or to finally get comfortable with my true face, others’ opinions be damned. On that Sunday in Turks when I sat scribbling my soul onto paper, I chose Door Two. My slow walk to freedom, which began as a flurry of painful and disjointed thoughts, eventually morphed into a published letter – one that inspired a viral moment.