Evelyn Groenink discusses her new book Incorruptible: The story of the murders of Dulcie September, Anton Lubowski and Chris Hani
More about the book! 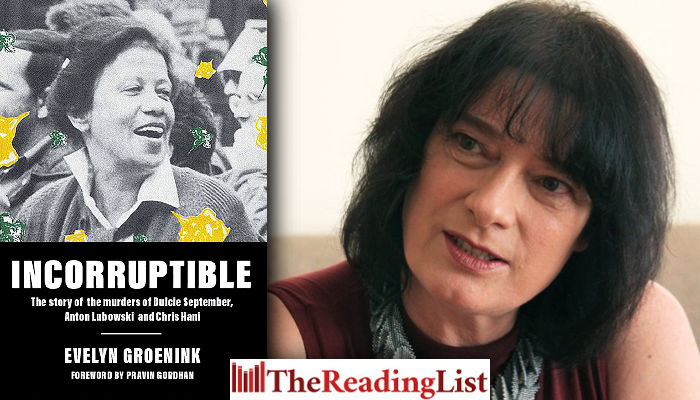 Evelyn Groenink’s new book Incorruptible: The story of the murders of Dulcie September, Anton Lubowski and Chris Hani is out now, distributed by Jacana Media.

It is often thought that Dulcie September, Anton Lubowski and Chris Hani were assassinated by apartheid forces simply because they were freedom fighters. But Incorruptible, a nail-bitingly thrilling reflection of Groenink’s painstaking research over the past 30 years, shows the truth is different.

All three tried to keep their organisations, the ANC and SWAPO, free from wrongdoing. They stood against mafias who had invaded their movement’s inner circles. They were not only brave anti-apartheid fighters: they were incorruptible.

One of the most explosive revelations in this book concerns the murder of Chris Hani, 25 years ago. Groenink reveals how the police buried evidence from no less than three witnesses who saw another murderer besides Janusz Waluś; and how the state’s ‘brave’ star eyewitness in all likelihood hadn’t even been there when Hani was shot.

The book has already caused controversy; so much that a planned publication in 2005 could not take place because of the myriad of legal and physical threats – against then-intended publisher, Jacana – that resulted after comments were invited from a number of individuals mentioned in the book.