Don’t miss Mark Winkler in conversation with Helen Moffett for the launch of The Errors of Doctor Browne (25 Aug)
More about the book! 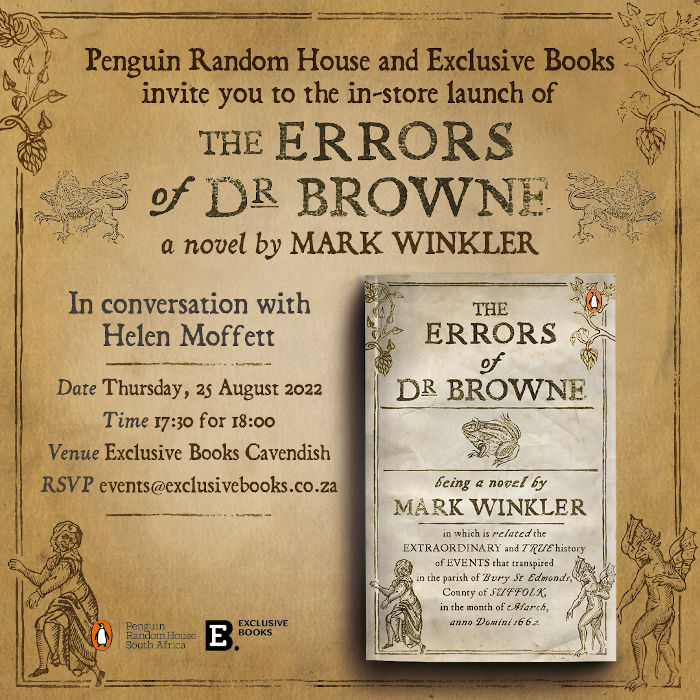 Penguin Random House and Exclusive Books invite you to the in-store launch of The Errors of Doctor Browne, the new novel by Mark Winkler.

The author will be in conversation with Helen Moffett.

When Doctor Thomas Browne accepts the role of both inquisitor and witness in one of England’s last witch trials, he embarks on what his biographer later calls ‘the most culpable and stupid action of his life’.

In Bury St Edmonds, 1662, two widows are charged with acts of witchcraft. Doctor Browne is known as a philosopher, natural scientist, logician and medical doctor, yet despite his best efforts, the trial hinges on the admissibility of ‘spectral evidence’: the accused women are deemed to have the ability to exploit their victims through dreams. This will set a legal precedent for the infamous Salem witch trials in Massachusetts thirty years later.

Mark Winkler’s novel is a wry and insightful glimpse into the limits of reason, the patriarchal need to control every aspect of womanhood, and our ongoing preoccupation with reputation.

Penguin Random House and Exclusive Books invite you to the in-store launch of 'The Errors of Doctor Browne', a novel by Mark Winkler (@giantblackdog).

The author will be in conversation with Helen Moffett (@Heckitty) at @ExclusiveBooks Cavendish on 25 August at 17:30. pic.twitter.com/Opr4OKA3I9