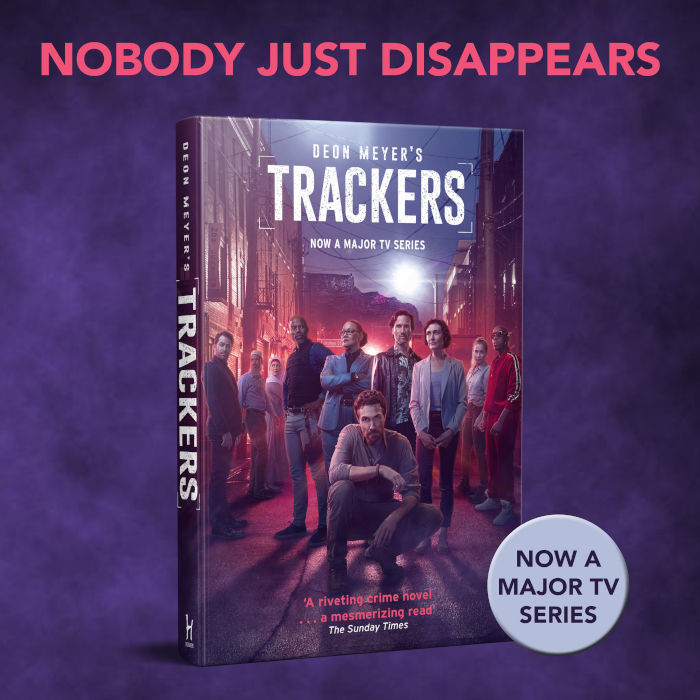 A new edition of Trackers by Deon Meyer is out now from Jonathan Ball Publishers!

A housewife running from years of domestic abuse. A bodyguard hired to escort a smuggled rhinoceros. A group of terrorists on a quiet residential street. A secret government agency. A retired policeman in the private sector.

Everyone leaves a trace …

Milla has finally escaped her abusive husband, only to find herself at the heart of an anti-terrorist operation.

Lemmer has agreed to protect a pair of smuggled rhinos on a thousand-kilometre journey – his strangest job yet will also be his most dangerous.

And former policeman Mat already wants to quit his new job as a private investigator. But he has promised a young woman he will find her missing husband … wherever the trail may lead.

From the vibrant streets of Cape Town to the wilds of Zimbabwe, from luxurious gated communities to the ganglands of the Cape Flats, different paths begin to cross in a novel of ever-increasing suspense.

Deon Meyer has published 13 novels and two short story collections. His books have been published in more than 40 countries and translated into 27 languages worldwide. His novel Dead Before Dying was turned into the international TV series Cape Town.