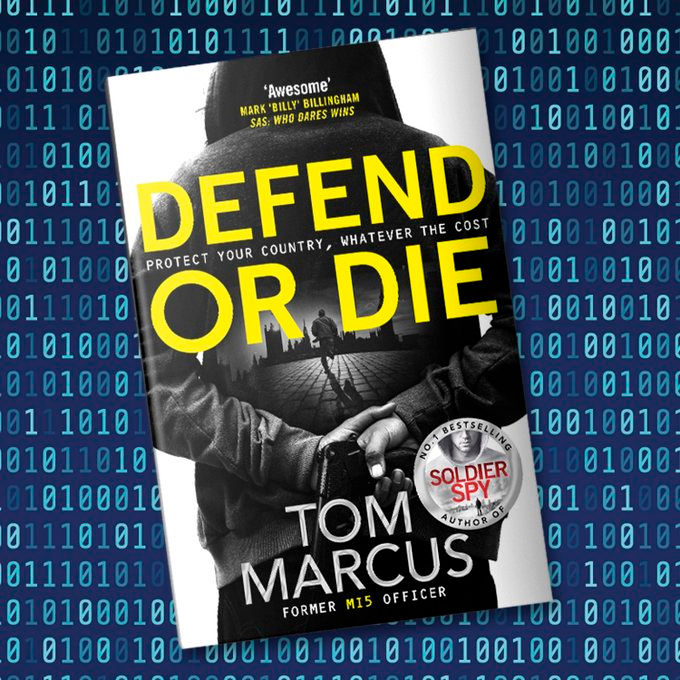 Defend or Die – the new book by former MI5 officer Tom Marcus, author of the bestselling Soldier Spy – is out in January 2021 from Pan Macmillan SA!

When no one knows you exist, you don’t have to play by the rules …

Meet former MI5 officer Matt Logan, now part of a totally deniable government organisation known as ‘Blindeye’, with full licence to do whatever it takes to neutralize threats to the UK’s national security.

When intelligence comes through that the Kremlin plans to launch a terror attack in London, Logan and the team set in motion a surveillance operation on a billionaire Russian oligarch who may be connected with the incoming threat.

As they dig into the man’s life, they soon discover a network of incredibly dangerous individuals whose plans could tear the nation apart. Battling personal demons of his own, Logan must defend his country from a terrifying enemy, or die trying …

Defend or Die is the second in Tom Marcus’s breathtaking series featuring tortured MI5 operative Matt Logan, following on from Capture or Kill.

Tom Marcus, former MI5, grew up on the streets in the North of England. He joined the Army at 16 and went on to became the youngest member of the Armed Forces to pass the six-month selection process for Special Operations in Northern Ireland.

He was hand picked from the Army into MI5 as a Surveillance Officer. He left the Security Service after a decade on the frontline protecting his country due to being diagnosed with PTSD.

An extraordinary battle and recovery took place which led Tom to write his first book, Soldier Spy, which has been vetted and cleared for publication by MI5. It’s the first true ground level account ever to be told. The first time in the Security Services’ history a Surveillance Officer has told the real story of the fight on our streets and his debut book went straight to Number 1 on the Sunday Times bestseller list.

Tom, now consults on projects within TV and film including the TV dramatisation of his book Soldier Spy. Defend or Die is his second novel, following on from Capture or Kill.

Due to the ongoing specific threat to Tom Marcus, MI5 insist he keep his identity hidden and he continues to work with the Security Service and other agencies to ensure he stays safe.