Crossroads: I Live Where I Like – pre-order and Jacana Media will match with a copy to donate to schools and libraries across the country
More about the book! 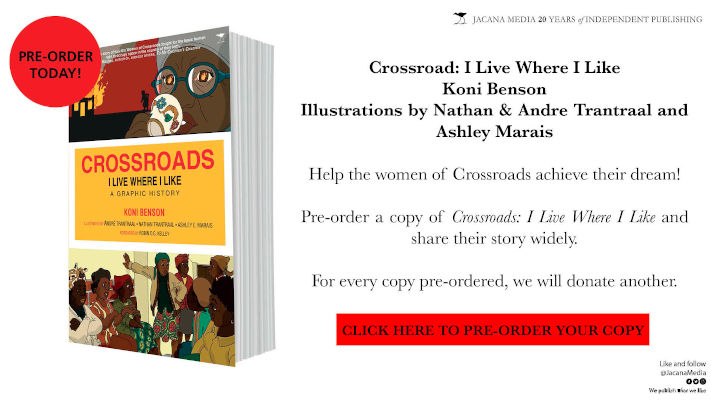 Crossroads: I Live Where I Like by Koni Benson, with illustrations by Nathan and André Trantraal and Ashley Marais, is out soon from Jacana Media.

Pre-order your copy today and become part of the #Crossroads community.

Jacana Media will match each copy ordered between 17 and 31 March 2022 with a donated copy! All such donated copies will be distributed to local schools and libraries throughout the country.

And if you order before the end of March you will get free delivery!

The book will be out at the end of April.

This searingly observant illustrated history of the women of Crossroads during the 1970s and 1980s tells a history of past and present organised resistance movements led by black women.

‘I heard about the famous women of the Crossroads struggle, which resulted in Crossroads being the only African informal settlement in the 1970s to successfully resist the apartheid bulldozers … I wanted to know what happened to the women who spearheaded the struggle for Crossroads,’ says Koni Benson, the author of this graphic novel-style history, and lecturer in the Department of History at the University of the Western Cape.

Illustrated by South African political cartoonists, André and Nathan Trantraal, together with Ashley Marais, Crossroads: I Live Where I Like, joins some recent histories which are written for both children and adults alike.

The candid illustration style and the deeply felt text is a testament not just to the team who produced the book, but to the remaining women of Crossroads, who wanted their stories to have the widest reach possible.

Crossroads: I Live Where I Like is a crucial exploration of a neglected part of South African history. It has all the hallmarks of a book that will be regarded as a pioneer in both form and content.