Children’s book celebrates the science behind skin colour: Skin We are In by Sindiwe Magona and Nina G Jablonski
More about the book! 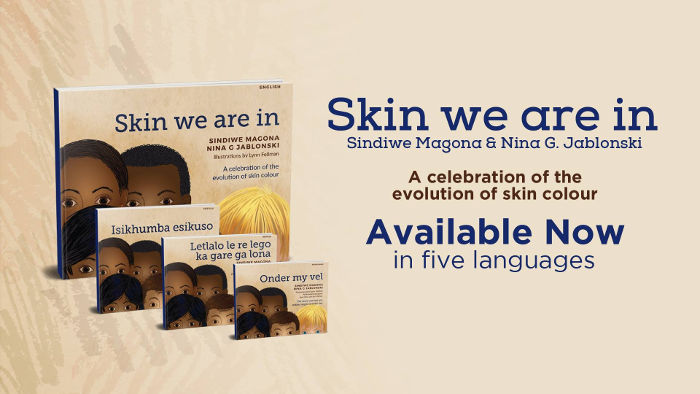 One of South Africa’s literary stalwarts, Sindiwe Magona, has teamed up with world-renowned American anthropologist, Nina G Jablonski, to create Skin We are In, a much-needed book about race and skin colour for children.

Together with award-winning illustrator Lynn Fellman, the trio have researched, written and produced a lively and colourful book to educate children on the science behind skin colour.

The essence of the story lies in the knowledge that despite appearances, on the inside we are all the same.

When asked why she embarked on the project Jablonski cites the need for ‘accessible, authoritative scientific education’ in the country and says that Magona was the only person to help fulfill her vision.

‘More than anything I wanted the book to be believable for kids. It had to be written in their voices, for their experiences,’ Jablonski says. Skin We are In is a celebration of the glorious human rainbow, both in South Africa and beyond.

Magona has written the story of five young friends as they explore and discuss the skin they are in. The scientific narrative, written by Jablonski, expands and supports the conversation topics generated by the children’s adventure, as eye-catching illustrations and informative graphics, drawn by Fellman, keep young readers intrigued and entertained.

The book will be launched in Stellenbosch on Saturday, 17 March 2018. Find out more.

‘The book is a testament to the inspiration, vision, and conviction of dozens of people, who created, edited, reviewed, and promoted it because they knew that the children of South Africa and the world needed it,’ says Jablonski.

Skin We are In is published by David Philip Publishers, an imprint of New Africa Books. The book is currently available in five languages: English, isiXhosa, isiZulu, Afrikaans and Sepedi. Skin We are In is available for purchase nationwide.

When we meet someone, one of the things we notice is the colour of their skin. But what can someone’s skin colour tell us about them? Despite what some people say, your skin means very little! Inside we’re all the same. Join Njabulo, Aisha, Tim, Chris and Roshni as they discover why humans have different skins, and how people’s thinking about skin colour has changed throughout history. Skin we are in is a celebration of the glorious human rainbow, both in South Africa and beyond.

Sindiwe Magona has written a story of five friends as they explore and discuss the skin they are in. The scientific narrative, written by Nina G Jablonski, expands and supports the conversation topics generated by the children’s adventure.

Sindiwe Magona has been writing books for adults and children since 1990. To date she has written more than 120 children’s books. She is currently Writer-in-Residence at the University of the Western Cape and has won numerous awards in her lifetime, including the Order of Ikhamanga (2011).

Nina G Jablonski is an American anthropologist, paleontologist and science educator. She studies and writes about human and primate evolution, and is especially interested in how skin and colour have evolved and influenced human life and societies. She is a Permanent Fellow of the Stellenbosch Institute for Advanced Study (STIAS).

Lynn Fellman is an American multimedia artist and science communicator. She is an Artist-in-Residence at Cold Spring Harbor Lab and a Fulbright Scholar who studies, draws, paints, and lectures about the wonder and beauty of biological science.

Don’t miss the launch of The Madiba Appreciation Club: A Chef’s Story in Pretoria

Hidden Voices: The decolonisation of knowledge production in South Africa