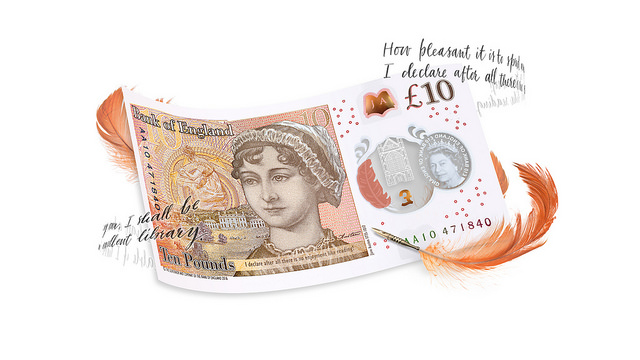 The new £10 note featuring Austen was unveiled by the Bank of England at the author’s resting place, Winchester Cathedral, on the 200th anniversary of her death.

The note includes an image of Austen and one of her most beloved characters, Elizabeth Bennet, as well as illustrations of her writing table and her brother Edward Austen Knight’s home, Godmersham Park in Kent, thought to be a source of inspiration.

The quote on the note – ‘I declare after all there is no enjoyment like reading!’ – is taken from Pride and Prejudice, and at first glance seems a good choice. However, as the Guardian points out, the words belong to one of Austen’s most deceitful characters, Caroline Bingley, who is trying to curry favour with the bookish Mr Darcy.

At the launch of the note, Bank of England’s governor Mark Carney explained why Austen was chosen, saying: ‘Our banknotes serve as repositories of the country’s collective memory, promoting awareness of the United Kingdom’s glorious history and highlighting the contributions of its greatest citizens.

‘Austen’s novels have a universal appeal and speak as powerfully today as they did when they were first published.’

The note will go into circulation on 14 September.