ANCYL Free State calls for burning of Pieter-Louis Myburgh’s ‘puke disguised as a book’ Gangster State
More about the book! 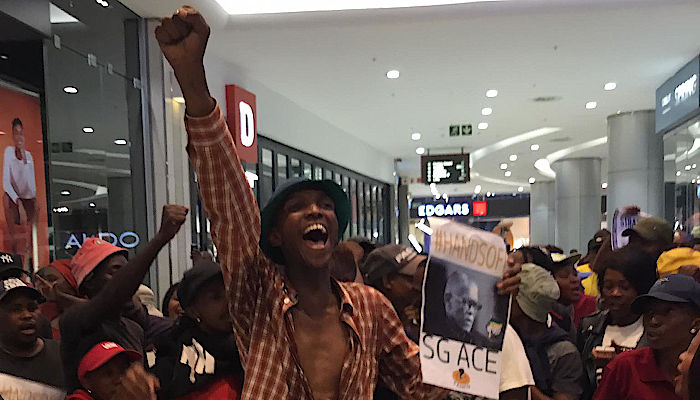 Image: Protesters at the launch of Gangster State in Joburg yesterday

In a statement, the ANCYL Free State referred to Gangster State as ‘Pieter-Louis Myburgh’s rubbish’, ‘garbage’ and ‘puke disguised as a book’.

The book implicates ANC Secretary-General Ace Magashule, who hails from the Free State, in state capture and looting in the Free State government.

The ANCYL in the Free State Province would like to notify and invite society to a session where Pieter-Louis Myburgh’s puke disguised as a book about the Secretary General of the ANC, Cde Ace Magashule will be burned.

We have arrived at this sober decision driven by our deepest sense of a need to maintain a clean environment free of garbage such as this one produced by this strat-com product.

We are however excited by the fact that this garbage came at a time when it’s quite cold in many parts of our province, as a result becoming the best source of much needed way to shake off the cold.

It is on these basis that we have decided to have a nice fire at the Mangaung South Side dumping site and then leave its remains right there, which is exactly where it belongs with its author.

It has become a matter of common knowledge that this rubbish is not only badly written but poorly researched as well, with the sole intention of casting aspersions on the character and the person of the Secretary General of the ANC.

We wish to state it categorically that we are unapologetic about our support to the Secretary General of the ANC, Cde Ace Magashule, who is a tried and tested product of the African National Congress, nurtured, grilled and baptised in the traditions and values of our movement. We therefore do not need any endorsement from white monopoly capital agents regarding his struggle credentials, we know them and shall defend him

We therefore urge society to bring along as many copies of this puke as possible, as well as any material that reflects the barbaric past such as the old apartheid flag along to our fireplace.

The details of our fireplace are as follows:

We are confident that this will remind all of those wishing to pollute our environment with rubbish to dispose of such useless and nonsensical thoughts.

Issued by the ANCYL in the Free State Province

In a statement, the ANC distanced itself from both the calls to burn the book, and the disruption of the launch ‘in the strongest possible terms’, saying: ‘We wish to emphasise that those who disrupted the launch did not do so in the name of the ANC nor on behalf of the ANC Secretary General.’

After Gangster State was released on Sunday 31 March, the ANC released a strongly worded statement slamming media coverage of the publication, and calling the book ‘fake news’ and a ‘highly personalised and vicious attack’ on Magashule.

In response, the book’s publisher Penguin Random House released a statement saying they stood by Myburgh and would not withdraw Gangster State despite criticism from the ANC.

On 5 April, Penguin Random House has released another statement in response to an interview Magashule gave eNCA, in which he called Myburgh a ‘blatant liar’, saying: ‘We are not afraid of Mr Magashule’s threats. We will continue to stand by the author of Gangster State, and we will continue to stand up for the freedom to publish without political pressure.’