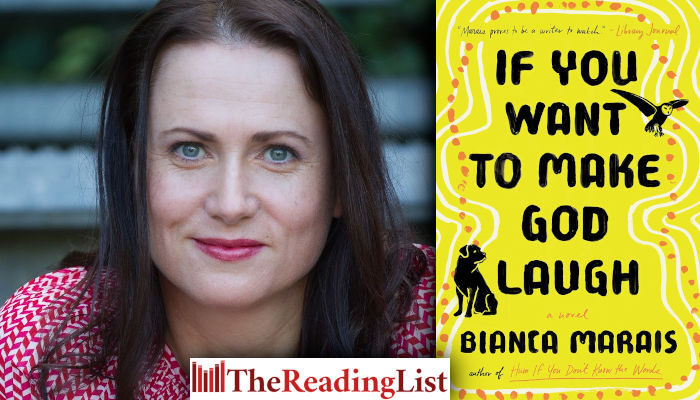 If You Want to Make God Laugh, the new novel from Bianca Marais, is out from Penguin Random House.

From the author of the beloved Hum If You Don’t Know the Words comes a rich, unforgettable story of three unique women in post-apartheid South Africa who are brought together in their darkest time and discover the ways that love can transcend the strictest of boundaries.

In a squatter camp on the outskirts of Johannesburg, 17-year-old Zodwa lives in desperate poverty, under the shadowy threat of a civil war and a growing AIDS epidemic. Eight months
pregnant, Zodwa carefully guards secrets that jeopardise her life.

Across the country, wealthy socialite Ruth appears to have everything her heart desires, but it’s what she can’t have that leads to her breakdown.

Meanwhile, in Zaire, a disgraced former nun, Delilah, grapples with a past that refuses to stay buried.

When these personal crises send both middle-aged women back to their rural hometown to lick their wounds, the discovery of an abandoned newborn baby upends everything, challenging their lifelong beliefs about race, motherhood, and the power of the past.

As the mystery surrounding the infant grows, the complicated lives of Zodwa, Ruth, and Delilah become inextricably linked. What follows is a mesmerising look at family and identity that asks: How far will the human heart go to protect itself and the ones it loves?

Bianca Marais is a South African who lives in Toronto. Her debut novel, Hum If You Don’t Know the Words, has been translated into four languages and was chosen by The Globe and Mail as one of the best 100 novels of 2017. The novel received many starred reviews and has been compared to both The Help and The Secret Life of Bees. O, the Oprah Magazine described it as ‘radiant’ while Library Journal listed Bianca as ‘a writer to watch’.