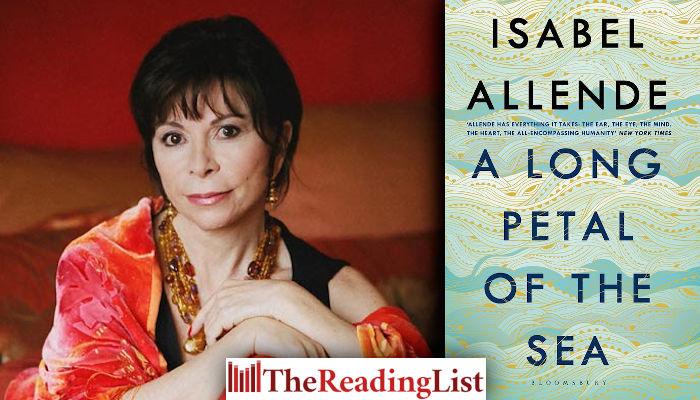 Sometimes, the difficult thing is not to flee but to return.

A love letter to Chile that soars from the Spanish Civil War to the rise and fall of Pinochet, and a stunning return to great storytelling heights, A Long Petal of the Sea is the much-awaited new novel from literary legend Isabel Allende.

‘Allende marries the fictional and the historical in lush, sprawling epics. A Long Petal of the Sea takes its place in the unparalleled canon she has created, exploring the sacrifices we make for the sake of those we love, and the love we sacrifice for the sake of our families.’ – Jodi Picoult

‘Isabel Allende is a grand storyteller who writes with surpassing compassion and insight. Her place as an icon of world literature was secured long ago. She will be celebrated, by readers and writers alike, for generations to come.’ – Khaled Hosseini

That September 2, 1939, the day of the Spanish exiles’ splendid arrival in Chile, the Second World War broke out in Europe.

Victor Dalmau is a young doctor when he is caught up in the Spanish Civil War, a tragedy that leaves his life – and the fate of his country – forever changed. Together with his sister-in-law, the pianist Roser Bruguera, he is forced out of his beloved Barcelona and into exile.

When opportunity to seek refuge in Chile arises, they take it, boarding a ship chartered by the poet Pablo Neruda to the promised ‘long petal of sea and wine and snow’ over the seas. There, they find themselves enmeshed in a rich web of characters who come together in love and tragedy over the course of four generations, destined to witness the battle between freedom and repression as it plays out across the world.

Born in Peru and raised in Chile, Isabel Allende is the author of twenty-four bestselling and critically acclaimed books, including The House of the Spirits, Daughter of Fortune and City of the Beasts.

A Chilean immigrant herself, Allende devotes much of her time to human rights causes and in 1996 founded the Isabel Allende Foundation. She lives in California.