A Headmaster’s Story: My Life in Education by Bill Schroder – the stuff of which teaching legends are made
More about the book! 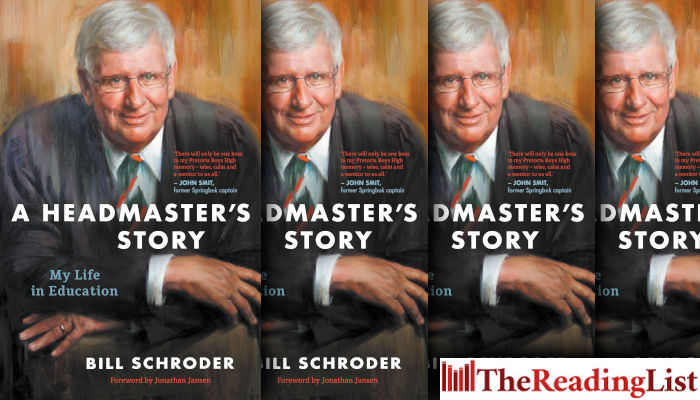 A Headmaster’s Story: My Life in Education by Bill Schroder is out now from Jonathan Ball Publishers.

‘There will only be one boss in my Pretoria Boys High memory – wise, calm and a mentor to us all.’ – John Smit, former Springbok captain

Bill Schroder is the stuff of which teaching legends are made. Strict, yet kind and tolerant, he blended a magic mix of care and discipline to bring out the best in his pupils.

In A Headmaster’s Story, Bill shares the story of his life, offering many insights into the challenges and rewards of teaching. He describes how he was a natural leader, and that helping young people realise their potential was his life’s calling.

Bill also charts how his teaching philosophy developed as he taught at and led a variety of schools, including SACS, Western Province Prep, Rondebosch Boys’, Westerford, Rhodes High, Pinelands High in Cape Town and York High in George.

When he was appointed head of Pretoria Boys High in 1990, Bill took on the challenge of leading one of the country’s top state schools and soon earned the undying admiration of pupils, parents, staff and Old Boys alike. At the end of a long and distinguished career, he did not rest on his laurels but went back into the fray, helping to mentor a struggling township high school.

Here is a teacher who has left an indelible mark on thousands of pupils, from Cape Town to Pretoria.

Bill Schroder was the headmaster of the prestigious Pretoria Boys High for 20 years (1990–2009). Before that he taught and performed a leadership role at several schools, including Rondebosch Boys High, Westerford High, Western Province Prep, SACS, Pinelands High and Rhodes High in Cape Town, as well as York High in George. He also coached and administered swimming, cricket, rugby and squash at various levels. In his retirement he is involved in a mentorship at Memezelo Secondary in Soshanguve and his leisure activities include playing bridge, watching sport and travelling. He lives in Pretoria.