A gripping portrayal of human frailty and courage in the face of mortal danger – A Russian on Commando: The Boer War Experiences of Yevgeny Avgustus
More about the book! 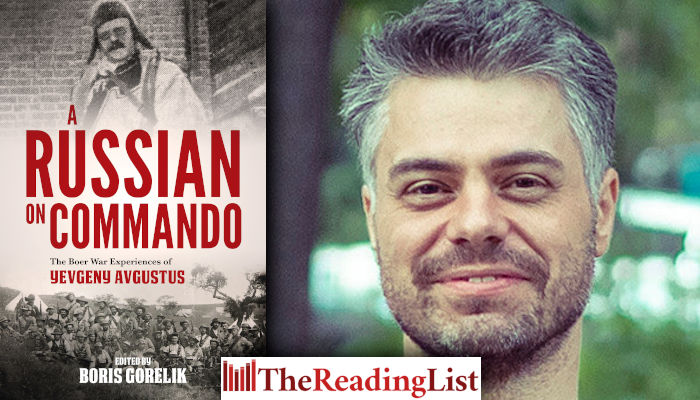 A Russian on Commando: The Boer War Experiences of Yevgeny Avgustus, edited by Boris Gorelik, is out now from Jonathan Ball Publishers.

‘Lucid, evocative and perceptive, this combat memoir is a delight.’
– Fransjohan Pretorius, Emeritus Professor of History

Avgustus and his companions joined the Krugersdorp Commando, and their experiences in the field are portrayed in vivid detail. The central part of this gripping account covers the Battle of the Tugela Heights in February 1900 and the Boers’ subsequent retreat. The immediacy of Avgustus’s writing captures his trepidation and excitement as he approaches the battle field for the first time, as well as his experience of life on commando.

The keen eye of this foreign volunteer brings to life a turning point in South African history. Avgustus is a gifted writer, and his narrative offers both acute observation and thoughtful introspection.

A gripping portrayal of human frailty and courage in the face of mortal danger, A Russian on Commando highlights both the strange attraction and the absurdities of war, illustrated with photos.

Boris Gorelik is a writer and scholar from Russia specialising in the history of Russian-South African cross-cultural encounters. He was born in Yekaterinburg, Russia, but has lived in Moscow since the age of eighteen, except for several years in Johannesburg, where he contributed articles to Rapport Weekliks. Gorelik is senior research fellow of the Institute for African Studies, Russian Academy of Sciences, Moscow. His works have been published in Russia, South Africa and the United Kingdom.

The book was translated from Russian to English by Lucas Venter, who studied Russian at the University of the Witwatersrand in the late 1980s and worked as an announcer and translator at Radio Moscow World Service in the early 1990s. Venter also taught Afrikaans at the Diplomatic Academy of the USSR Ministry of Foreign Affairs in Moscow. He currently lives in Pretoria.