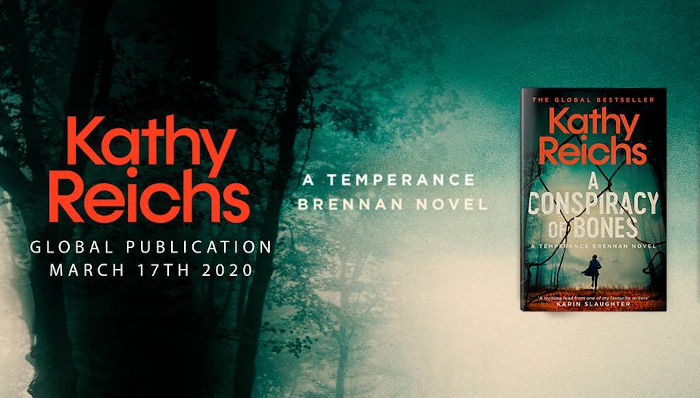 In A Conspiracy of Bones, Temperance Brennan must use all her tradecraft to discover the identity of a faceless corpse, its connection to a decade-old missing child case, and the reason the dead man had her phone number.

‘A Conspiracy of Bones shows off Kathy Reichs’ dazzling new level of plotting mastery. A thrilling read from one of my favourite writers.’ – Karin Slaughter

‘This is Kathy Reichs as you’ve never read her before. The story starts like a pistol shot and fires nonstop through over three hundred layered pages. The twists are meticulously planned and thrown like bamboozling curves on the edge of the plate. But you will see new layers to the brilliant Tempe Brennan that may surprise you. Read this book. It was created by a master of the genre who knocks it out of the park.’ – David Baldacci

It’s sweltering in Charlotte, North Carolina, and Temperance Brennan, still recovering from neurosurgery following an aneurysm, is battling nightmares, migraines, and what she thinks might be hallucinations when she receives a series of mysterious text messages, each containing a new picture of a corpse that is missing its face and hands. Immediately, she’s anxious to know who the dead man is, and why the images were sent to her.

An identified corpse soon turns up, only partly answering her questions.

To win answers to the others, including the man’s identity, she must go rogue. With help from a number of law enforcement associates including her Montreal beau Andrew Ryan and the always-ready-with-a-smart-quip, ex-homicide investigator Skinny Slidell, and utilising new cutting-edge forensic methods, Tempe draws closer to the astonishing truth. But the more she uncovers, the darker and more twisted the picture becomes …

Kathy Reichs’s first novel Déjà Dead was a #1 New York Times bestseller and won the 1997 Ellis Award for Best First Novel. A Conspiracy of Bones is the 19th entry in her series featuring forensic anthropologist Temperance Brennan. Reichs was also a producer of the hit Fox TV series, Bones, which is based on her work and her novels. Reichs is one of very few forensic anthropologists certified by the American Board of Forensic Anthropology. She served on the Board of Directors and as Vice President of both the American Academy of Forensic Sciences and the American Board of Forensic Anthropology, and as a member of the National Police Services Advisory Council in Canada. She divides her time between Charlotte, North Carolina, and Montreal, Québec.