A book that will grow your business and make you famous – Spin: The Art of Managing The Media by Nick Clelland and Ryan Coetzee
More about the book! 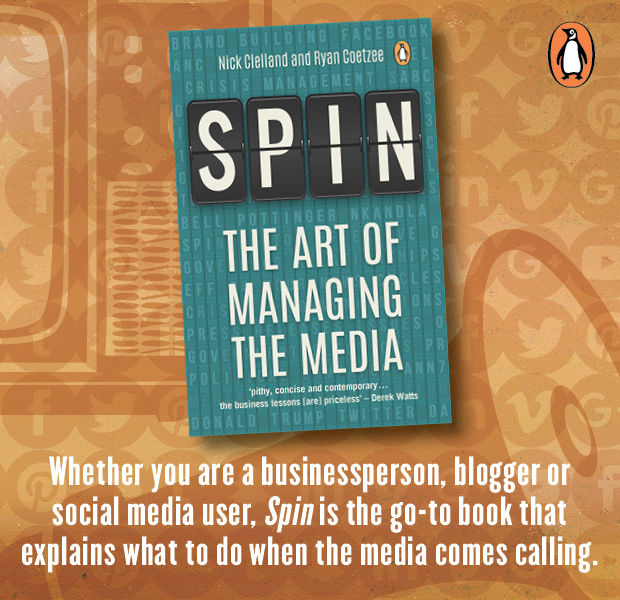 Spin: The Art of Managing The Media, by Nick Clelland and Ryan Coetzee, is out now from Penguin Random House!

‘There are many books on the shelves or online to hone your skills in brand building and media relations. But I haven’t read any as pithy, concise and contemporary as Spin, which has its roots in the ruthless world of political shenanigans. Not only are the business lessons priceless, but you will enjoy the local and international vignettes which drive home the messages.’ – Derek Watts

Many people will have to encounter the media at some time in their lives: CEOs, sportspeople, politicians, social media users, celebrities, thought leaders, academics, bloggers, authors – the list is endless. Spin is a go-to book that explains what to do when the media comes calling. Whether you’ve done something wonderful and newsworthy or something you wish no one knew about, this book will teach you how to maximise the good news and manage the bad.

Spin will also introduce you to a previously well-guarded political methodology that actually harnesses the media and which, if used carefully, can grow your business or make you famous.

Using real-life examples from the cauldron of politics, Spin covers essentials like brand strategy, practical media skills, driving issues, social media, crisis communications and ethics. This is a unique and valuable resource that will help you master the media.

Ryan Coetzee is a South African politician and political strategist, who has served as special advisor to UK deputy prime minister Nick Clegg and was the 2015 general election director of strategy for the Liberal Democrats. In 2006, Ryan was director of strategy for the campaign for the UK to remain in the EU. He previously served as an MP in South Africa, as CEO of the Democratic Alliance, as the party’s general election campaign chief, and as chief advisor to Western Cape premier Helen Zille.