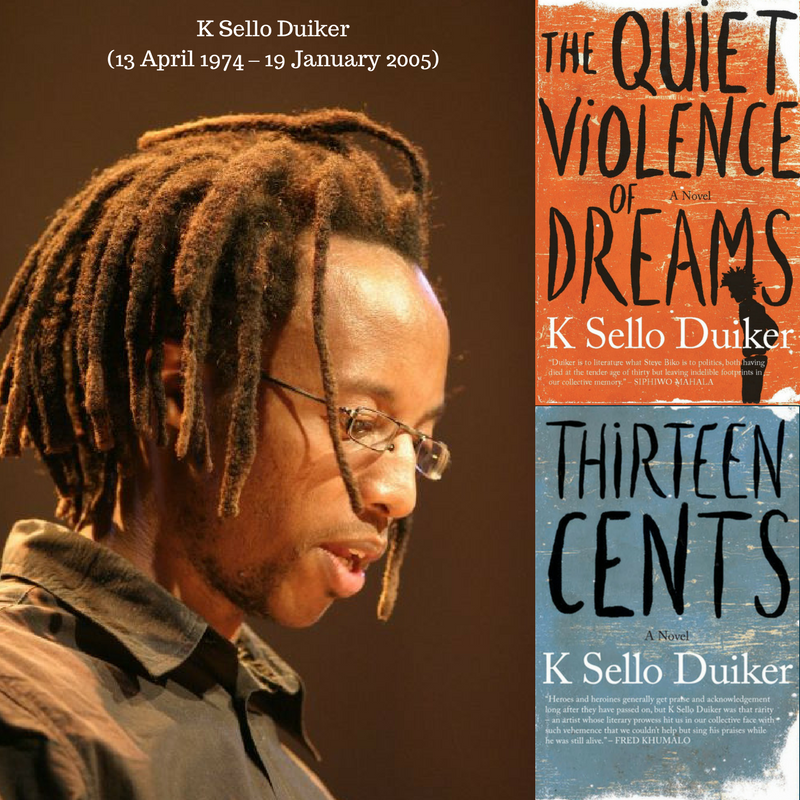 Duiker was born on 13 April 1974 and grew up in Soweto and East London. He studied at Rhodes University and briefly at the University of Cape Town. It was after being institutionalised at a psychiatric hospital that he wrote his first novel, Thirteen Cents, in two months.

Thirteen Cents and The Quiet Violence of Dreams were rereleased by Kwela Books in 2013 and 2014, respectively.

Thirteen Cents is the story of Azure, a blue-eyed, dark-skinned orphan living on the streets of Cape Town. At just 12 years old, Azure considers himself “almost a man”, and the novel is a gritty account of his experiences with gangsterism and the sex trade.

I find Allen sitting at his usual place near the white girl. She’s got stitches under her left eye and you can still see some bruises if you look past her flashy make-up. I’m nervous because I didn’t see him three days later like he said and because he is wearing his dark RayBans. That means he’s either stoned on drugs, got an ugly bruise or that he is in a foul mood. I go up to him anyhow.

“What the fuck do you want?”

“I say a lot of things. Do you always listen to everything I say?”

“And that’s why you’re on the streets and I’m here. Stupid fuck, just grow up.”

“Did you really think I was going to get you shoes, motherfucker?”

I shake my head.

“Listen, if you want to buy a TV or a hi-fi or something pricey I can get it for you at a hot price. But shoes, clothes, don’t fuck with me. Understand?”

“No. Really see. RayBan. Gucci, Armani and Nike,” he says
pointing to his clothes.

“Now look at how you’re dressed and compare it to how I’m dressed. Fuck, you stink. Now fuck off. I’m not the Salvation Army.”

I get up and walk away quickly.

I walk towards town, all the time praying that Gerald and his rats won’t see me. I go to Long Street to a shop called Second Time Around. They sell good second-hand clothing. And the woman who works behind the till is not a vulture. She lets you roam around for a while and get what you want, no matter how you look. I spot a pair of veldskoene that look like my size. I take them to the till even though the price sticker says sixty-five.

“I need these shoes,” I say to her politely.

“How much have you got?”

“Sixty,” I plead and take out the money.

She looks at me out of glasses that sit nearly at the bottom of her nose.

I give her the money. She rings it up on one of those old tills that make a lot of noise, like a toy.

I take off my strops and put them in my jacket. I put on the shoes anxiously. She watches me.

I stand up. A pair of socks is on the table.

I take the socks and unfasten my laces. My dry feet make crackling sounds as I slide the socks over them. I tie the shoes properly.

“I can walk forever in these shoes,” I tell her. “Thank you,” I say and leave.

I can feel her eyes on me as I walk out of her shop. I go to Bree Street, not far from the mosque. I know a guy called Vincent who usually hangs around there. At night he sleeps outside one of the shops. He’s also from Joburg.

“Mpintshi, I haven’t seen you for a while,” he says when he sees me.

“This is where all the action is. You know me, I like big cities.”

“It’s better than Sea Point. You have to put up with all those gangsters,” he says. He’s older than me.

“Hey, I needed shoes, they were the only ones I could get.”

“I could have got you shoes, you know that.”

“Ja, but there’s Allen to think about.”

“Oh him, I forgot. Is he still terrorising the neighbourhood?”

“Ja, it’s his neighbourhood. I have to go through him first.”

We sit under a palm tree. He opens a pack of fish and chips and breaks half a loaf of white bread into two. We eat silently and finish the meal in no time.

“I’ve got to be straight with you, man.”

“The word is out on the street that Gerald wants you.”

“Are you serious?” I say, terrified.

He just looks at me.

“Nothing. I mean just that. Okay I was smoking a zol with Sealy and then Sealy left to do some shit with Gerald. So then Gerald comes over to me and by mistake I call him Sealy. That’s what happened.”

“Fuck, you know how that nigger hates black people. You insulted him.”

“Listen, stop hiding, ’cause he’s been looking for you. Just go to him and say you’re sorry and that you’ll do anything he wants.”

“No, I just spent it on these shoes.”

“It would have made it easier if you had some money.”

“Don’t worry, bra, you’ll live through it. He won’t kill you. See this railway line here,” he says pointing to an old scar, eight stitches that run down the side of his head.

“Gerald gave me that. Look, don’t even think of running away. Believe me, you won’t get far. The man’s got wheels. He’ll fuck you up and kill you if you do that.”

“I know you’re scared, bra, but just go. But take off those shoes. You know Gerald, he’s fucked up. He thinks he’s white because he’s got straight hair and a light skin. If you show up with those shoes and your blue eyes, he’ll kill you. He’ll say, Who the fuck do you think you are? Trying to be white?”

“I know that, bra. We come from Mshenguville together. I know that. But that asshole doesn’t. He’d love to have your blue eyes. Everyone knows that except you. You must try and work around you, blue eyes.”

“I mean you have to be the blackest person.”

“No, I mean you have to be more black . . . like more black than all of us. You must watch what you wear. Like those shoes. Things like that give you away. Like if people see you and they don’t know you’re right, the first thing they look at is how you look. Right?”

“So now they look at your blue eyes and your shoes and they think blue eyes, veldskoene, he’s trying to be white. That’s how people think. See what I mean?”

“That’s why people have beat you up all your life. They think you’re not black enough.”

“So what do I do? Why does everything have to be so
hard?”

“Fuck, don’t panic on me. I’m helping you. Just watch what you wear. Look at makwerekwere. Try and be a little more like them.”

“Okay,” I say pulling myself together.

“Maybe you must buy one of their tops.”

“Take off your shoes,” he tells me. “I know a guy who knows another guy. I’m sure we can get you other shoes. I’ll sell these at one of the second-hand shops.”

“Don’t go to the one in Long Street.”

“You know the one near Mama Africa, the one with the nice woman who works there. That’s where I bought them.”

“Ja, I know the one you’re talking about. No, keep the socks,”
he tells me.

I take out my strops from my jacket.

“These are the things Allen gave me.”

“I thought he was white.”

“No, you can see it in his eyes. I know he looks white but if you look at him closely you can see some coloured blood. He hates it, that’s why he’s so fucked up. I mean, imagine being nearly white but not quite. Know what I mean?”

“That’s why he’s such an asshole.”

“Ever seen him beat up one of his chicks? The other day he completely fucked up this white bitch who couldn’t keep her mouth shut.”

“Ja, but there’s more to it than that. It’s that white thing. It just eats him up that he’s not all white. Why do you think he’s always so well dressed?”

“Grown-ups are fucked up.”

“No, Cape Town is fucked up. Really.”

“Look, you better go. It’s best if you hand yourself in. Know what I mean?”

“Fuck knows what he’ll do to you.”

“Remember how my eyes used to get me in trouble at school?”

“Ay, they used to moer you at school.”“Nothing changes.”

I chew my nails.

“Come back in a couple of days’ time.”

“Don’t be so negative. Who knows, you might live to laugh about this one day.”

I look at him and say nothing. This is my life we’re talking about, I think.

“Anyway, come back in a couple of days’ time and I’ll have shoes for you.”