You Don’t Own Me – the new novel from the queen of suspense, Mary Higgins Clark, and Alafair Burke
More about the book! 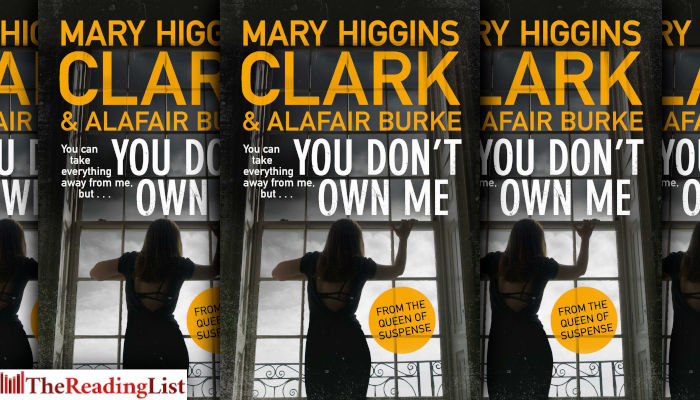 You Don’t Own Me – the extraordinary new novel from the grande dame of suspense, Mary Higgins Clark, and Alafair Burke.

Mary Higgins Clark published her first suspense thriller in 1974, and has been writing ever since. Each of her 51 books has been a bestseller and all of her novels remain in print, with her debut, Where are the Children, now in its 75 printing.

In 2014, Clark joined forces with novelist Alafair Burke to begin the Under Suspicion series, about television producer Laurie Moran and her crew tracking down and solving unsolvable cold-cases.

Laurie and her team have uncovered the worst of humanity over the years, from the murder of a rich woman at the Met Gala ball to the gunning-down of Laurie’s own husband. And now Laurie and her crew will be faced with their most difficult case yet …

The #1 New York Times bestselling author Mary Higgins Clark has written 37 suspense novels, four collections of short stories, a historical novel, a memoir and two children’s books. With her daughter Carol Higgins Clark, she has coauthored five more suspense novels, and also wrote The Cinderella Murder, All Dressed in White, The Sleeping Beauty Killer and Every Breath You Take with bestselling author Alafair Burke. More than 100 million copies of her books are in print in the United States alone. Her books are international bestsellers.

Alafair Burke is the Edgar-nominated, New York Times bestselling author of 12 novels, including The Wife, The Ex, If You Were Here, Long Gone and the Ellie Hatcher series. A former prosecutor, she is now a professor of criminal law and lives in Manhattan.

Read ‘Christmas 1965’, an excerpt from Imprisoned: The Experience of a Prisoner Under Apartheid

Don’t miss the launch of Charles Abrahams’s new book Class Action: In Search of a Larger Life at The Book Lounge (13 Feb)