We did not know it was the final farewell: Read an excerpt from Karina M Szczurek’s memoir, The Fifth Mrs Brink
More about the book! 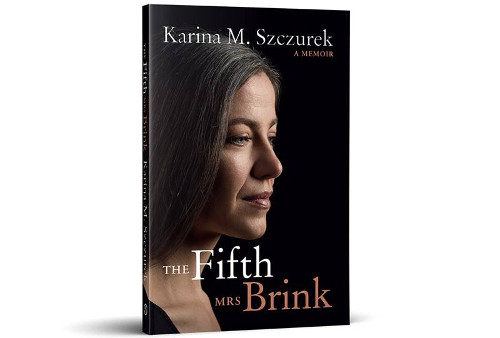 Jonathan Ball Publishers has shared an excerpt from The Fifth Mrs Brink, Karina M Szczurek’s soul-baring memoirs of her life before, with and after her marriage to André P Brink.

In the excerpt, Szczurek recounts the days before Brink’s last journey, in February 2015, to accept an honorary doctorate from the Belgian Francophone Université Catholique de Louvain (UCL). He passed away on the aeroplane on the way back to South Africa.

A homage to a marriage cut tragically short by Brink’s death, and a diary of creative dissolution and knitting back together, The Fifth Mrs Brink will satisfy fans of Szczurek and her husband, both old and new.

There were signs. The grandfather clock stopped at six o’clock while we were away in Belgium in February 2015, never to be rewound by André again. After his death, the first time I glanced at a watch it was also six o’clock. I don’t remember which time zone, but it doesn’t matter. We were slipping through time anyway.

Just before Martin Buysse arrived in Cape Town from Louvain-la-Neuve in January 2015, I was ironing in front of the TV in the lounge when one of the wooden sculptures André had brought back from Mali fell from a loudspeaker next to me. Miraculously, I caught it before it hit the floor and broke. It was the male figure. The woman remained standing. I told André and Martin about it at dinner when we were discussing the reason for Martin’s visit: André was to receive an honorary doctorate from the Belgian Catholic University of Leuven and Martin was his sponsor. It was on his recommendation that André was to be honoured. Neither Martin nor André could understand why I was upset about the incident of the sculpture falling. One just had to glue the figure back on with Prestik. If only it were that simple … The sculpture remained on the chair next to the speaker for many months.

Mid-January, André’s first wife Estelle phoned from Grahamstown to inform us that Leisje, Rob Antonissen’s widow, had died. Rob had been a mentor to André at Rhodes and he considered both him and his wife dear friends. It was because of his having studied at the university in Louvain in the distant past that André was so thrilled about being awarded the honorary doctorate from the same place. I was in bed next to André when he spoke to Estelle and told her, after receiving the news of Leisje’s death, that he would be next. Nonsense, Estelle said and ordered him not to say such things. Later that day, she phoned again and wanted to speak to me, worried why André had sounded so negative. I explained that he was in a lot of pain – his knees were still sore and he had been suffering from shingles for the past month – and I tried to reassure her as much as I could, but in retrospect it was one of those moments when I intuitively knew that André was preparing.

The shingles worried me endlessly. André was clearly racked with pain. We saw our neurologist again around this time, and with his customary optimism he promised that even though it would probably take some time, André would eventually be pain-free. Just seeing the doc cheered André up. It always did, both of us. He is one of those doctors who are genuine. Caring and compassionate, clued up about the latest developments in his field. We trusted him unconditionally. The illness began in December, at first manifesting itself in the horrific-looking boils, but without any pain, and then André’s skin returned to its normal appearance but the pain increased day by day, and managing it became very tricky. They say that shingles can be latent in your body for decades but attacks when your psychological and physical immune systems are down. André had been depressed and enduring agony since the serious troubles with his knees had begun months earlier, greatly reducing his mobility. This even made sitting at the computer for long hours impossible. Thus, purely physically, writing became a challenge. Frustration set in. André’s ability to focus and to retrieve things from the library of his great mind became difficult. There was a moment when one day I bought Die Burger for him, which he’d read religiously, and found it untouched in the evening. I noticed that he was not reading as much as usual, by and by starting books only to abandon them midway. It wasn’t that they could not hold his interest; I began to worry that he might not care or remember enough of the plot to continue reading with pleasure.

We began seeing the neurologist in 2007 after André had the first of two minor strokes. One day, in the middle of the morning, he began speaking gibberish to me. I laughed. So did he. He tried saying some- thing again, and it all came out wrong. It went on like this for a few minutes and we simply laughed through the incident, neither of us comprehending what was really happening. We ended up with the doctor after André had spoken to his daughter Sonja and she alerted us to the possibility of a stroke. I remember distinctly at the time that one of the standard questions the doctor asked during our initial visit was whether André read the newspaper and books, watched the news, or went out regularly. Apparently, one of the worrying signs of ageing is that people become uninterested in the world and stop engaging with it.

For someone who lived for words, not being able to write freely or to read with gladness was unbearable. I could see how André suffered, tried to engage him in other ways, but I knew that in spite of how much he loved me, life without literature, without creativity, did not have much meaning for him. He worried he would not be able to complete Gold Dust, the novel he embarked on after Philida, nor fulfil the two-book agreement he’d entered into with his publisher.

Because of the shingles, the trip to Belgium hung suspended. Everything was in place – tickets, bookings, programme – but we were taking it a day at a time. The doctor said it would be good for André to travel, to be recognised for his achievements. He hoped, as I did, that the trip would cheer him up. I remembered how much the Arts & Culture Trust Lifetime Achievement Award for Literature had meant to André when it was awarded to him in November the previous year. At that stage he had so little belief left in himself as a writer that the recognition came just in time to save André from utter despair. The fact that it was handed over to him by friends whose work he treasured and admired – Sandra Prinsloo and Kerneels Breytenbach – also meant a lot to him. The money that came with the award alleviated pressing financial worries which had been making our life onerous for years.

The trip to Belgium was meant to boost our morale. But we only truly decided to embark on it the day before we were to fly. Until the very last moment, neither of us was certain whether André’s pain would not be too overpowering to attempt the journey. What reassured me was the fact that my mom and Krystian had decided to join us in Belgium, and I knew that jointly we would be able to cope with whatever challenges awaited. André enjoyed their company. All our previous trips with them had been great successes and we were both looking forward to seeing them and discovering new places together. Belgium was waiting with its accolades, world-famous chocolates and beer.

In the last few days before our journey we had unexpected visitors. In retrospect, I am extremely grateful for the opportunities these precious encounters offered for saying goodbye, without any of us knowing that it was the final farewell. We were leaving Cape Town on Thursday night. The Saturday before, long-time friends Karin and Gerhard phoned to inform us that another friend, Tim, was visiting from Grahamstown and asked whether they could all come for Sunday brunch. We were delighted to see the Rhodians and spent a lovely afternoon with them, catching up over a delicious meal. I remember Tim and André speaking about Shakespeare.

The day before our trip, it was my birthday. We had decided to celebrate only after our return from Belgium, so apart from a glorious breakfast and presents, there was nothing planned for the day but packing. But then our friends Kristien and Jan phoned with birthday wishes and announced that they would be coming through with pink champagne and sushi in the late afternoon. And just after them, totally out of the blue, André’s son Gustav phoned and said that he and his wife Marie-Jean were unexpectedly in town to attend to the estate of her late uncle. They asked whether they could pop in with a present. We ended up having a marvellous birthday party, chatting away into the evening.

We did not know these were goodbyes, but remembering them afterwards we all found them profoundly precious.

‘I wanted it to be controversial’: Kalim Rajab explains the title of his book on Harry Oppenheimer – A Man of Africa