Towards a New Deal by Rob Davies – in-depth insight into the inner workings of the South African government
More about the book! 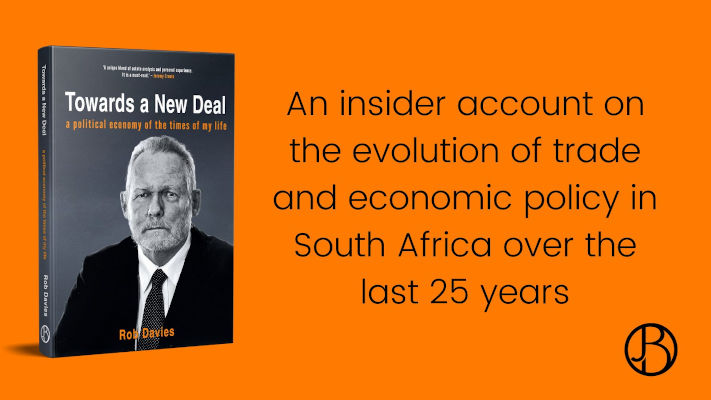 Towards a New Deal: A Political Economy of the Times of My Life by Rob Davies is out in April from Jonathan Ball Publishers.

South Africa’s past quarter century has been shaped by the decisions and reach of one of the oldest political alliances in southern Africa, that between the African National Congress and the South African Communist Party.

Towards a New Deal offers an insider account on the evolution of trade and economic policy in South Africa over the last 25 years from one of government’s most articulate and former senior members.

Beginning in the early 1970s leading up to the current Ramaphosa era, Rob Davies gives in-depth insight into the politics, policies, and inner workings of the South African government. He concludes with a chapter on the ‘new dawn’ focusing primarily on the impacts of Covid-19 and the extremely challenging period that lies ahead.

Told with intriguing anecdotes and, in parts, with the author’s own very personal and humanising history of activism and time spent in exile, this memoir presents a strong case for economic change, and is essential reading for economists, businesspeople, and ordinary readers keen to grasp the political and economic dynamics of the moment.

‘As the world economic system stumbles, as trade wars intensify, and the dangers of a diminishing global multilateralism threaten – Davies’ new book offers a unique blend of astute analysis and personal experience. It is a must read.’ – Jeremy Cronin, Former South African Deputy Minister of Transport

Rob Davies became a Member of Parliament in 1994 after serving both the African National Congress (ANC) and South African Communist Party (SACP). He worked as a Professor and Co-Director of the Centre for Southern African Studies at University of the Western Cape (UWC). During this period, he undertook policy research for ANC and Southern African Development Community (SADC). Davies has served as Minister of Trade and Industry. He holds a PhD in Political Studies from the University of Sussex and a Master’s degree in International Relations from the University of South Hampton in United Kingdom.