‘The woman’s voice may have been pulling him, but his own curiosity was propelling him forward …’ Read an extract from The Last Sentence by Tumelo Buthelezi!
More about the book! 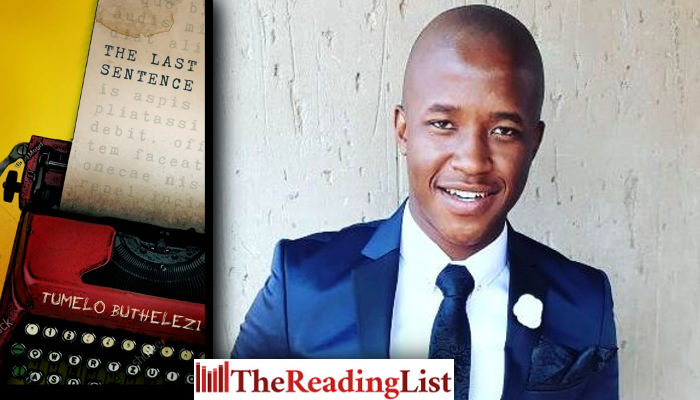 BlackBird Books has shared an extract from The Last Sentence by Tumelo Buthelezi!

Bandile Ndala is a once-successful scriptwriter who now struggles with substance abuse, anxiety and depression as he starts to lose his tenuous grip on reality. His career has stagnated with the rejection of his literary work and life at home with his family is under strain. His life starts to descend into a living nightmare, literally.

Bandile is desperately searching for inspiration so he can make a much-needed comeback.

When Bandile finds himself in room 28 at the Cariba Inn with a sultry temptress he wonders whether he has gone crazy. Has the formerly brilliant writer who churned out hit TV show after hit TV show lost his mind? Is he on drugs? Or is it all in something he ate at a dinner a few years back … ?

Buthelezi takes us through the inner workings of Bandile’s mind as he thinks about his writing and battles with the possibility of not producing something meaningful, ever.

The Last Sentence introduces us to a remarkable literary talent. Tumelo Buthelezi is an exceptional storyteller.

Tumelo Buthelezi is from Sebokeng in the Vaal. He is a founding member of the Ink Gallery, a movement that promotes an interest in reading. The Last Sentence is his debut novel.

Bandile parked near a tall, dull-brown building at the corner of a fruit and veg shop. He was in one the most run-down parts of Vereeniging.

People there lived side by side with factories that spat pollution into the air. Homeless men harassed pockets for spare change. Barely clothed women writhed at street corners in broad daylight, trying to lure their next client to an out-of-view spot to complete the transaction. Drug dealers moved weight in the backstreets as junkies snatched belongings to feed their insatiable cravings.

As terrifying as the scene might have been to outsiders, Bandile appreciated the display – people living gritty lives. It was the fertiliser from which great stories grow. Some of his best, most successful scripts such as that for Ayinamsebenzi Lonto were set in places such as this. The TV drama followed a cast of characters living on the fringes of society in downtown Johannesburg.

Each had dreams that viewers of the coveted Monday to Friday 8:30pm peak-hour slot could relate to. Their lives meandered like the Gariep, criss-crossed with each others’ and forced them into ethical dilemmas. Love at odds with fidelity. Hidden truths that once revealed cut like razors. Coveting that came with consequences worse than the 10 plagues of Egypt.

There was a time when places such as this were his regular haunts, before the success, fame and awards. He felt disgusted to realise that now he felt more like a visitor to a zoo.

Stepping out of his luxury sportster – another remnant from a life that was slipping away – he greeted the self-appointed, toothless car guard. The chap with an empty grin and wearing an old, faded reflector jacket had been watching him with beady eyes since he parked.

‘Don’t worry, mlungu wam’,’ the guard said. ‘Your car will be fine when you come back.’

The wooden club hanging from his belt made the words seem as much a threat as a promise.

Broken glass crunched underfoot as he walked towards Cariba Inn at the corner. His body was still under the control of the woman’s hypnotic voice. Had it not been for her, he would not be here.

Cariba Inn from the outside looked like it was built when the area was more prosperous. A pair of art deco-style pillars flanked either side of the entrance and a plush maroon carpet, run ragged by decades of foot traffic, lined the entryway that led to the check-in desk.

The attendant sat in a booth with a window of plexiglass and wrought-iron bars. A door behind her, inside the booth, suggested that another room lay behind. Tiny holes in the shape of a circle in the plexiglass made communicating with the world beyond the booth possible.

Displayed prominently above the booth were the room rates, available at hourly, daily or weekly prices. It made Bandile think Cariba Inn the kind of place frequented by cougars and blessers with their Ben 10s and sugar babies.

He cleared his throat and asked the woman for room 28. He thought he might face a barrage of questions for such a specific request. But no.

The woman reached for a key on a rack beside her. She dropped it into a tray on her side of the booth. She pushed the tray and it popped out on Bandile’s side. He hesitated for a moment before reaching for the single key tied by a string to a wooden keyholder marked ‘Room 28’ in black ink.

‘You’re booked for a week. Check-out’s at 11am – no later. We have to clean,’ she said. She seemed completely bored.

Before Bandile could ask his next question, the woman answered.

‘Up the stairs over there, second floor, last room on the right,’ she said.

He walked towards the room in a state of confusion. Who’d booked the room for him? Was it one of Kulani’s famous ‘trick or treats’? Kulani had over the years used what can only be described as interesting ways to motivate his client during a slump. Or, he thought, could he still be dreaming, his body home tossing and turning in a bed without Zoleka but his mind lost deep in his subconscious.

Finally, outside room 28, he closed his eyes and tossed his head back. Was he really going to do this? He knew he was going to. He had to. The woman’s voice may have been pulling him, but his own curiosity was propelling him forward. He opened his eyes and looked at the key in his hand. He eased it into the lock, which gave way with a metallic click when he twisted.

Pushing the door open, he stepped into the room. The lights were on. He looked around. A musty carpet. A double bed with two side pedestals, one with a lamp and the other a bible. A desk and high-back office chair. A small kitchenette. He expected worse, much worse, based on how the hotel looked from the outside. He closed the door behind him.

As he looked around the room again, he noticed the office chair begin to turn, slowly. There had been someone sitting there the whole time. A woman with long braids. The same young woman from his nightmares.

‘Glad you could make it, Bandile,’ she said, rising from the chair. Her tone was measured and calm, like that of a well-trained concierge at a five-star boutique hotel. There was no malice whatsoever.

Still, Bandile felt the right side of his chest ache again. He rubbed it gingerly with his sweaty left palm.

‘Who?’ Bandile said, his mouth and lips suddenly dry. He could not complete the sentence meant to inquire as to her identity.

‘Yes, you,’ she said, raising her voice.

Bandile turned on his heel and made for the door. Two steps and he was there, but knew by then that it would not open. He’d heard the metallic click seal it shut when he turned. Fumbling for the key, he tried to unlock it. But there was no keyhole from this side of the door.

He turned to find her standing so close that their noses almost touched. His heart was pounding. She engulfed him with her arms. Her right hand came to rest on his lower back and her left locked around the back of his neck. It was warm and gentle. He had not felt a caress so tender in a long time.

‘It was always you. I didn’t know I was looking for someone like you until I found you,’ she said. ‘We are going to do beautiful things together.’

Unsure, he began to raise his own arms to return her embrace. But in a single, fluid motion she let go of him and jabbed a syringe into his neck, emptying a stinging substance into his blood stream. Her aim was impeccable. She’d nailed him right in the jugular.

The chemical agent got to work right away.

Bandile saw grey clouds of smoke gathering at the sides of his eyes and coming together swiftly to block his entire vision. He tried to blink them away, but to no avail. Every coherent thought he tried to form turned to mush, like overcooked pasta. Then, he fell face first towards the floor, landing with a single thud.