‘The situation in the Occupied Palestinian Territory is very similar to that of apartheid South Africa’ – John Dugard discusses his book Confronting Apartheid
More about the book! 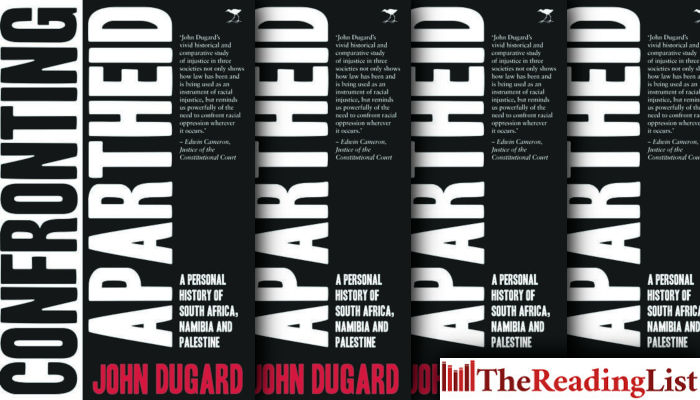 South Africa achieved notoriety for its apartheid policies and practices both in the country and in Namibia. Today Israel stands accused of applying apartheid in the Palestinian territories it has occupied since 1967.

Confronting Apartheid examines the regimes of these three societies from the perspective of the author’s experiences as a human rights lawyer in South Africa and Namibia and as a UN human rights envoy in occupied Palestine.

‘The question whether apartheid is applied in the Occupied Palestinian Territory is a very controversial one, and it’s very unpopular, in fact in many quarters the argument is seen as a form of antisemitism,’ Dugard says in the interview. ‘But the fact is that the policies and practices of Israel in the occupied Palestinian territory are so similar to those that were applied by South Africa during the apartheid years that it is important to make that comparison.

‘What I have suggested is that in order to decide whether apartheid is applied in the Occupied Palestinian Territory, one should in the first instance look at the question from the perspective of the South African experience, by observing whether the policies and practices of Israel are similar to those applied by South Africa.

‘In addition, I’ve suggested that one should look at the definition of apartheid, which is now accepted and is to be found in the Rome Statute of the International Criminal Court. This requires that their should be two racial groups, that one racial group should commit inhumane acts against the other group, and that this should be done with the purpose of achieving domination on the part of one racial group over the other.

‘In my reports as Special Rapporteur to the United Nations and in my writings, I have examined these practices, these inhumane acts, and have come to the conclusion that the situation in the Occupied Palestinian Territory is very similar to that of apartheid South Africa.’