The Silent Patient by Alex Michaelides – the gripping must-read debut thriller of 2019
More about the book! 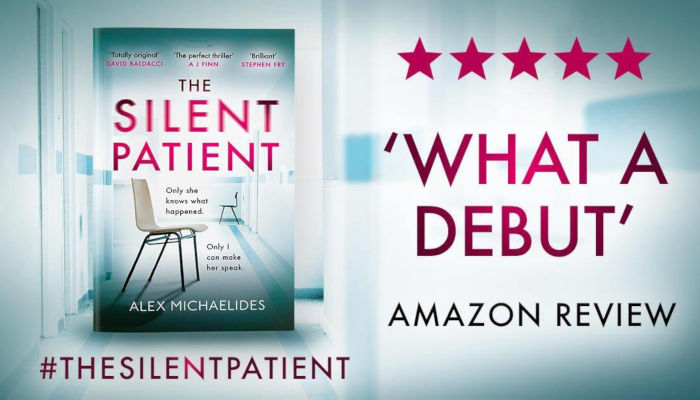 With film rights snapped up by an Oscar-winning Hollywood production company, rights sold in a world record 43 territories, and rave blurbs from David Baldacci, Lee Child and AJ Finn, The Silent Patient promises to be the debut thriller of 2019.

One of the best thrillers I’ve read this year. – Cara Hunter

The pace and finesse of a master. – BBC Culture

ALICIA
Alicia Berenson writes a diary as a release, an outlet – and to prove to her beloved husband that everything is fine. She can’t bear the thought of worrying Gabriel, or causing him pain.

Until, late one evening, Alicia shoots Gabriel five times and then never speaks another word.

THEO
Forensic psychotherapist Theo Faber is convinced he can successfully treat Alicia, where all others have failed. Obsessed with investigating her crime, his discoveries suggest Alicia’s silence goes far deeper than he first thought.

And if she speaks, would he want to hear the truth?

Alex Michaelides was born in Cyprus to a Greek-Cypriot father and English mother. He read English at Cambridge University and received a MA in screenwriting from the American Film Institute. He wrote the film Devil You Know, starring Rosamund Pike, and co-wrote The Con is On, starring Uma Thurman and Tim Roth. The Silent Patient is his first novel.