‘The round slid smoothly into the chamber of his Kalashnikov’ – Read an excerpt from The Heist Men by Andrew Brown
More about the book! 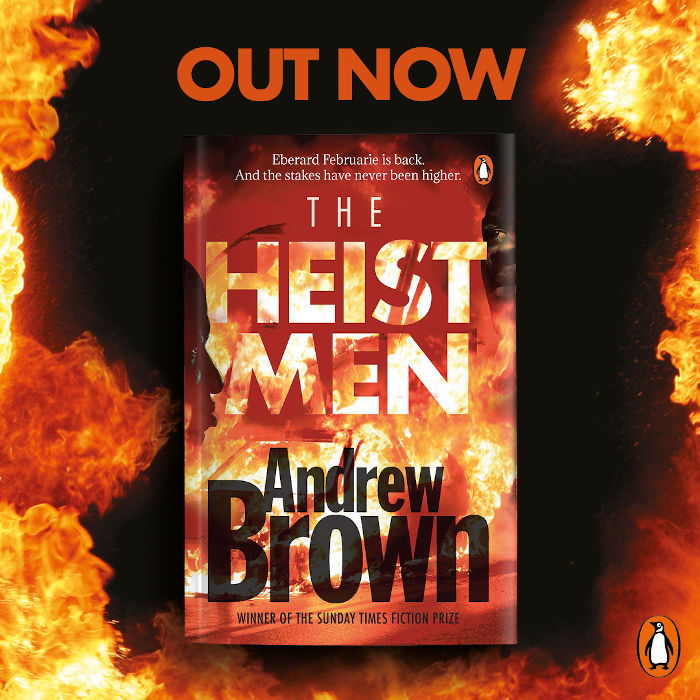 In this explosive new crime thriller, Brown pits his haunted detective against the most elusive enemy he has yet faced.

While dealing with his own demons, problems with his ex-wife and daughter, and a colonel with a history in the apartheid police force, Eberard moves ever closer to a dramatic showdown.

The round slid smoothly into the chamber of his Kalashnikov. He sat comfortably in the passenger seat, enjoying the weight of the weapon across his thighs, solid but not heavy. He always cleaned the automatic rifle himself, meticulously dismantling and effortlessly reassembling the moving parts. Sometimes they practised with blindfolds, using only the feel of each oiled component between their fingers.

He was invariably the first to slide a round into the barrel. He had their respect, he knew, for that and much else. The stock was marked with his initials in black permanent marker: AX. One day he might need to pull the trigger; his life would depend on its smooth, reliable action. Perhaps today was that day.

He stared through the windscreen smeared with summertime bugs collected on the drive along the N7 highway, surveying the scene almost impassively. There was something strangely irritating about the sight of the heavily armoured vehicle lying helplessly on its side and straddling two lanes of the highway. Not just that it looked ridiculous, its wheels splayed out like the twitching feet of a dying gargantuan. It was the disorder that the pathetic spectacle demonstrated. It reminded him of those dreadful scenes where the seemingly indestructible rhino becomes mired in mud and succumbs to relentless attack from the nipping bites of carnivores. How he hated those wildlife scenes, the sheer impotence of the victim. It amazed him how popular those National Geographic programmes were. But then, people loved hunting too, he supposed.

Indeed, looking at it, the vehicle had the look of an injured quadruped about it: underbelly exposed, steam rising from its crushed canopy, a broken piece of exhaust pipe flailing in the air. It had lost all of its sense of impenetrability, the thick windows and armour plating obscured from view, only its soft tummy visible now. One wheel was still turning slowly. He wanted to will the stupid thing to stand up and defend itself. Adhere to the order of things. But with one word from him, the hyenas would slip from the bushes into the open. There was no doubt: carnage was about to ensue. Feeding time. He clicked the heavy safety catch to auto and opened the car door. The dry warmth of the day, masked until now by the air conditioning in the BMW 3 Series, enveloped him. It was a beautiful late morning. He stretched his shoulders and rolled his neck from side to side. It was going to be hot under the balaclava. He needed to find a thinner cotton one. Cape Union Mart maybe, or a motorbike accessory shop. He would have to google. He opened the folded stock on the automatic weapon. The solid click of the stock locking into position focused his mind. One deep breath to steady any disquiet.

All three lanes of the northbound highway were empty. But a line of cars on the other side of the freeway was starting to slow, drivers gaping, brakes suddenly jerking as they nearly rear-ended one another. A slow procession of open-mouthed faces was framed in passing windows. Inevitably, one motorist stopped altogether, the spectacle just too enticing. A lone male, no passengers to worry about. The first spectator. Then another, emboldened, his hazard lights flashing as if he had reason to be there.

It was such a South African phenomenon: putting on your hazard lights meant that no matter where you had decided to stop your car on a whim, it was somehow authorised and lawful. Hazard lights were above the law. Perhaps they were the law.

On his side of the highway all traffic had stopped at a respectfully petrified distance, no one approaching the scene. Someone had attempted an ill-considered U-turn and blocked two of the three lanes anyway. There was hooting and shouting coming from the blockage, some degree of panic taking hold. The southbound side was protected by both distance and a cement barrier. There, an entire lane of cars had now stopped. Transfixed voyeurs at the watering hole, watching the last dying breaths of the behemoth. That side quickly became clogged, some hooting to get a move on, but most simply jockeying for a better view. There wouldn’t be a single cellphone not buzzing with activity.

There was the briefest pause in the proceedings. The two groups weighed each other up over the distance of a few highway lanes and the intervening concrete barrier. The group of armed men scanned the growing crowd warily, looking for any security officials or bravehearts, the motorists both aghast and excited. He ignored the watchers, squinting towards the burgeoning traffic jam on their side for any security vehicles. None that he could make out. This was the moment he loved most. The stillness that stretched exquisitely, waiting for him to unleash his men. It was a moment of power, the crowd transfixed by his every move, anticipating without knowing what would happen next. And he had complete control. Once he flicked his orchestra into action, they would play flawlessly. More than the power he felt, it was the precision, the choreographed certainty that he so loved. He lifted his gun into the air and nodded to the driver of the front vehicle. There was a discernible ripple among the bystanders. Car doors started to open. The closest spectator, the single man in a Volvo, opened the door and started filming with his cellphone. Soon others were doing the same. Their every move would be recorded now, no doubt soon to be viral on social media, shared first among locals and then overseas by I-told-you-so conservatives living in bedsits in London and suburban homes in Perth. #WildWest, #AfricanSafari, #TIA.

He wondered why he despised them. Perhaps it was arrogance on his part, but they seemed to feed off the drama without any insight into why it was happening, or how they were an integral part of the outcome. Their interest was shallow, devoid of understanding. They were like parasites, crippling their host with illness, an unsustainable reliance that failed to appreciate that inherent in their existence was their demise. He turned and waved his rifle in the Volvo driver’s direction. With a squeak of alarm, the man disappeared back inside his car, the skittish meerkat of the wilderness scene. As soon as he had turned back to the task at hand, the same driver popped up again to continue filming.

The team set about their task with practised determination. Mechanic, Cook, the Zimbabwean and him, each member had their position and their function, planned in advance and executed with discipline. The Zimbabwean was on point today with an AK-47, keeping an eye out for any approaching security. The roadway in front of him was scattered with welded clusters of nails – no one was getting through without having to stop and clear the way.