The only way to get your child back, is to kidnap another child … you are now part of The Chain – new by Adrian McKinty
More about the book! 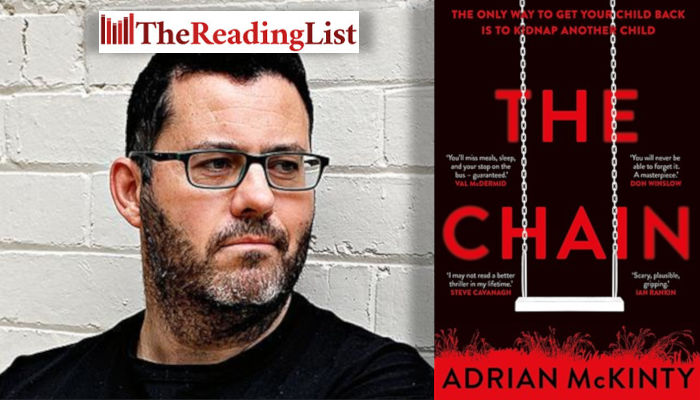 The award-winning novelist was tending bar and driving an Uber to make ends meet and was about ready to quit writing when The Chain brought in a six-figure book deal.

The Chain has Liam Neeson written all over it – and a film adaptation is indeed in the works, after a seven-figure movie deal for the book’s rights.

‘A masterpiece. The Chain is one of the finest novels ever produced in the genre – up there with Marathon Man and Red Dragon. It just doesn’t get any better than this. I may not read a better thriller in my lifetime.’ – Steve Cavanagh, author of smash hit Thirteen

VICTIM. KIDNAPPER. CRIMINAL. YOU WILL BECOME EACH ONE.

The morning starts like any other. Rachel Klein drops her daughter, Kylie, at the bus stop and heads into her day. But then a phone call changes everything. A woman has Kylie bound and gagged in her back seat, and the only way Rachel will ever see her again is if she pays a ransom – and kidnaps another child. The caller is a mother herself, whose son has also been abducted, and if Rachel doesn’t do exactly as she’s told, both children will die. Rachel is now part of a terrifying scheme – The Chain.

The rules are simple: find the money, find your victim, and then commit a horrible act you’d have thought yourself incapable of just 24 hours ago. Rachel is an ordinary woman, but over the coming days she will be pushed beyond ordinary limits to save her daughter. What the anonymous masterminds behind The Chain know is that parents will do anything for their children. But what they don’t know is that they may have met their match.

Can Rachel be the one person to finally break The Chain?

Adrian McKinty was born and grew up in Belfast, Northern Ireland during the Troubles of the 1970s and 1980s. His father was a boilermaker and ship’s engineer and his mother a secretary. Adrian went to Oxford University on a full scholarship to study philosophy before emigrating to the United States to become a high school English teacher. His books have won the Edgar Award, the Ned Kelly Award, the Anthony Award, the Barry Award and have been translated into over 20 languages. Adrian is a reviewer and critic for The Sydney Morning Herald, The Irish Times and The Guardian. He lives in New York City with his wife and two children.

Don’t miss the launch of Running Wild: The Story of Zulu, an African Stallion by David Bristow at Skoobs

NB Publishers on Hawks raid of Jacques Pauw’s home: ‘We condemn this jackboot move in the strongest of terms’