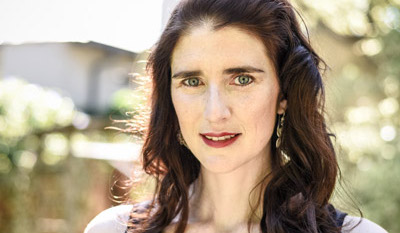 Selling LipService, Tammy Baikie’s remarkable debut novel, was the winner of the Dinaane Debut Fiction Award, and is out now from Jacana Media.

“I was one of them – just as stroke-stricken, equally lost for words. We were as kinbled as our brain MRIs pinned up, on the wall of the ward. Each one with an almost identical inkblot lesion – a black mark against our names and the naming of all things.”

Since coming of haemorrh-age, Frith must wear a LipService patch to write or speak. The words the patch produces are not her own. Scripted by copywriters, they promote one sponsoring brand or another. With them, ‘You’ – a voice in her head that is the patch’s brand persona and her conformist alter ego – appears.

Through the noise of You talking a variety of different LipService brands, Frith struggles to find her way back to speaking for herself. She believes her tastures – her ability to taste things she touches – are the key. But other elements of this consumerist society are equally interested in tastures for commercial gain.

Listen to Baikie chatting about the novel with Tamara LePine-Williams on Classic FM: