The lived experiences of workers during apartheid – The Story of One Tells the Story of All
More about the book! 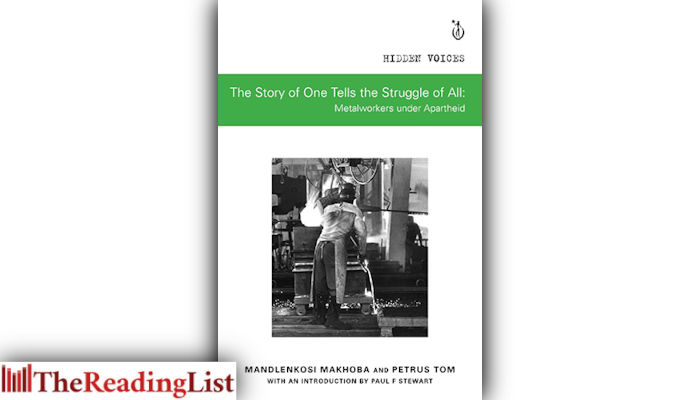 The Story of One Tells the Struggle of All: Metalworkers Under Apartheid is the third volume in the Hidden Voices Series.

It is comprised of two booklets first published under Raven Press’s Worker Series, which aims to tell the lived experiences of workers during apartheid.

‘I work here in Boksburg but my spirit is in Mahlabatini. My spirit is there because I come from the countryside. I was born there and my father was born there.’ Thus begins the story of Mandlenkosi Makhoba.

In The Sun Shall Rise for the Workers, he tells the story of a man from the rurals who comes to Gauteng hoping for work and a better life. He tells of alienation from one’s family, of the unfair treatment from factory ‘bosses’ and his hopes for a more humane life for the worker.

‘When you are out of a job, you realise that the boss and the government have the power to condemn you to death. If they send you back home … and you realise that you can’t get any new job, it’s a death sentence. The countryside is pushing you into the cities to survive, the cities are pushing you into the countryside to die. You get scared. It’s a fear that you come to know after a week without any food.’

This is the impasse that workers still find themselves in.

In his autobiography, My Life Struggle, Petrus Tom tells the story of his life and work in the Vaal Triangle, first as a metalworker in a cable factory and later as a full-time union organiser.

Extraordinarily detailed and intensely political, it covers wide swathes of ground – family history, forced removals, the 1960 anti-pass campaign, the South African Congress of Trade Unions (SACTU), workplace organisation and conflict, internal trade union politics, youth-led community struggles, racial conflict, the formation of the Federation of South African Trade Unions (FOSATU), worker education and much more. This is indeed an extraordinary record of events woven together in one life and yet emblematic of lives shared by so many South Africans who have lived through these times.

Despite the passing of over thirty years since they were first published, the stories of Mandlenkosi Makhoba and Petrus Tom continue to be relevant as they point to the ongoing struggle against exploitation and oppression which continues across the globe today. Both draw attention to the experiences of the working class that continue to be disregarded until they make life inconvenient for the middle and upper class.

The Hidden Voices Project emerged out of an interest in left intellectual contributions towards discussions on race, class, ethnicity and nationalism in South Africa. Before and during the apartheid years, many universities were closed to existing local ideas and debates, and critical intellectual debates, ideas, texts, poetry and songs often originated outside academia during the period of the struggle for liberation.

The Hidden Voices Series seeks to publish key texts, books, documents and other materials that were never published under apartheid, or seminal books that have gone out of print. We hope that these recovered, lost or forgotten voices will help reinvigorate the humanities and social sciences, and contribute to the decolonisation of knowledge production in South Africa and indeed throughout Africa.

Karin Pampallis is the Hidden Voices programme manager. She is currently a researcher at the Society Work and Development Institute, University of the Witwatersrand.

Edward Webster is the Hidden Voices Programme Director. He is Professor Emeritus in the Society, Work and Development Institute (SWOP) at Wits University and Director of the Chris Hani Institute in Cosatu House. He is an internationally recognised sociologist, and the author of six books and over one hundred academic articles as well as numerous research reports.

Frogs of Southern Africa: Now updated to include 12 new species