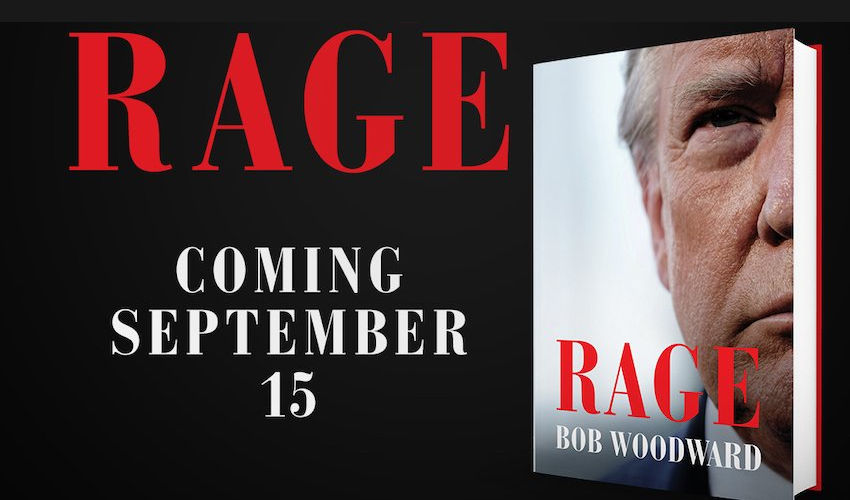 Rage by Bob Woodward is out in September 2020 from Jonathan Ball Publishers.

Rage is an unprecedented and intimate tour de force of original reporting on the Trump presidency.

Woodward goes behind the scenes like never before, with stunning new details about early national security decisions and operations and Donald Trump’s moves as he faces a global pandemic, economic disaster and racial unrest.

‘Woodward’s prose offers readers that delicious, vicarious sense of being an insider, right there in the room with Bob, a witness to presidential sulks and boasts.’ – Washington Post

‘[Rage], using Trump’s own words, depicts a President who has betrayed the public trust and the most fundamental responsibilities of his office.’ – CNN

‘He has an extraordinary ability to get otherwise responsible adults to spill [their] guts to him … his ability to get people to talk about stuff they shouldn’t be talking about is just extraordinary and may be unique.’ – Robert Gates, former director of the CIA and Secretary of Defense (2014)

Woodward, the author of 13 bestsellers, including Fear: Trump in the White House, shows Trump up close in his entirety before the 2020 presidential election.

President Trump has said publicly that Woodward has interviewed him. What is not known is that Trump provided Woodward a window into his mind through a series of exclusive interviews.

At key decision points, Rage shows how Trump’s responses to the crises of 2020 were rooted in the instincts, habits and style he developed during his first three years as president.

Rage draws from hundreds of hours of interviews with first-hand witnesses, as well as participants’ notes, emails, diaries, calendars and confidential documents.

Woodward obtained 25 personal letters exchanged between Trump and North Korean leader Kim Jong Un that have not been public before. Kim describes the bond between the two leaders as out of a ‘fantasy film’, as the two leaders engage in an extraordinary diplomatic minuet.

Rage will be the foundational account of the Trump presidency, its turmoil, contradictions and risks. It is an essential document for anyone seeking an accurate inside view of the Trump years — volatile and vivid.

Bob Woodward is an associate editor at The Washington Post where he has worked for 49 years and reported on every American president from Nixon to Trump. He has shared in two Pulitzer Prizes, first for the Post’s coverage of the Watergate scandal with Carl Bernstein, and second 20 years later as the lead Post reporter for coverage of the 9/11 terrorist attacks.