The curious Trump-apartheid connection: Read an excerpt from Apartheid Guns and Money
More about the book! 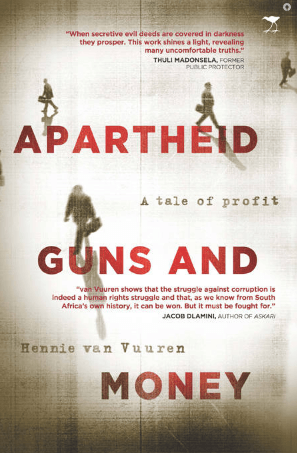 The Daily Maverick has shared an excerpt from Apartheid Guns and Money: A Tale of Profit by Hennie van Vuuren, published by Jacana Media.

Van Vuuren reveals a historical connection between United States President Donald Trump acolytes Roger Stone and Paul Manafort and apartheid spies who were attempting to buy a US President.

Stone has been Trump’s adviser for the past 30 years, while Manafort was Trump’s campaign manager.

An indirect and little understood link between Stone and the apartheid regime lies in one of the last big plays by Pretoria to influence US politics. In 1988 PW Botha’s government had hoped to buy itself a US president in Jack Kemp, the former professional gridiron footballer and congressman. Kemp would eventually lose the nomination, which went in favour of George Bush. Bush nevertheless appointed Kemp to his cabinet a year later as the secretary of housing and urban development. Kemp was later on Bob Dole’s ticket as vice-president as part of Dole’s unsuccessful bid for the White House in 1996.

To keep reading on the Daily Maverick, click on the link above.