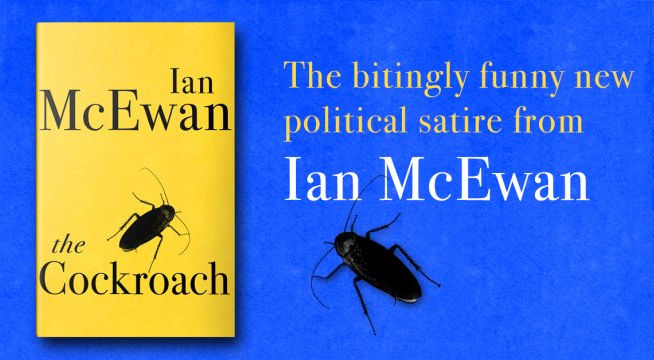 In Ian McEwan’s new novella The Cockroach the main character, Jim Sams, undergo a metamorphosis from an average nobody to the most powerful man in Britain when he wakes up to find himself the Prime Minister.

Sams’ mission? To carry out the will of the people, no matter what – or whom – gets in his way.

‘As the nation tears itself apart, constitutional norms are set aside, parliament is closed down so that the government cannot be challenged at a crucial time and ministers lie about it shamelessly in the old Soviet style, and when many Brexiters in high places seem to crave the economic catastrophe of a no deal, and English national extremists are attacking the police in Parliament Square, a writer is bound to ask what he or she can do. There’s only one answer: write. The Cockroach is a political satire in an old tradition. Mockery might be a therapeutic response, though it’s hardly a solution. But a reckless, self-harming, ugly and alien spirit has entered the minds of certain politicians and newspaper proprietors. They lie to their supporters. They express contempt for judges and the rule and norms of law. They seem to want to achieve their ends by means of chaos. What’s got into them? A cockroach or two, I suspect.’

That morning, Jim Sams, clever but by no means profound, woke from uneasy dreams to find himself transformed into a gigantic creature.

Jim Sams has undergone a metamorphosis. In his previous life he was ignored or loathed, but in his new incarnation he is the most powerful man in Britain – and it is his mission to carry out the will of the people. Nothing must get in his way: not the opposition, nor the dissenters within his own party. Not even the rules of parliamentary democracy.

With trademark intelligence, insight and scabrous humour, Ian McEwan pays tribute to Franz Kafka’s most famous work to engage with a world turned on its head.