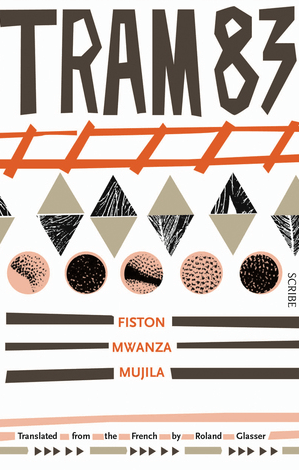 In a wonderful article in the new issue of Asymptote, Roland Glasser writes about the experience of translating Fiston Mwanza Mujila’s award winning debut novel Tram 83 from French into English.

I had first read Tram 83 four months previously, and within a few pages I was almost physiologically transported. I could feel the sweat coursing down my back, and smell the fetid stink of bodies, beer, diverse bodily fluids, garbage, and grilled dog meat. It was pure literary orgasm, engendering a raving, expletive-laden book report for Will Evans of Deep Vellum Publishing in Dallas, who bought it. Two months later, I turned myself inside out, at some cost to my sanity and personal relationships, to craft a two-chapter sample securing me the right and privilege of rendering Fiston’s “jazz novel” into English. Now, as I stroll with Fiston toward the restaurant, the book has become a critical success in France, garnering several major prize nominations and a full-page cover spread in Le Monde des Livres. Cometh the hour, cometh the man, but I have yet to translate another word.