Reunited with her family on the Oprah show – Read an excerpt from The Girl Who Smiled Beads by Clemantine Wamariya
More about the book! 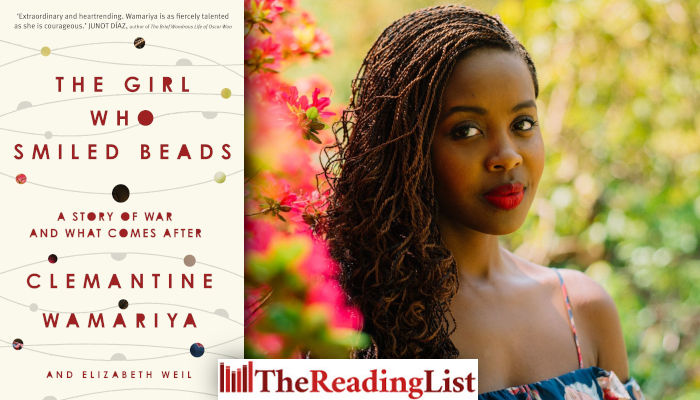 Penguin Random House has shared an excerpt from The Girl Who Smiled Beads: A Story of War and What Comes After by Clemantine Wamariya.

I’d fantasised about this moment so many times. In Malawi, I used to write my name in dust on trucks, hoping my mother would see my loopy cursive Clemantine and realise that I was alive.

Clemantine was six years old when her mother and father began to speak in whispers, when neighbours began to disappear, and when she heard the loud, ugly sounds her brother said were thunder. In 1994, she and her fifteen-year-old sister, Clare, fled the Rwandan massacre and spent the next six years wandering through seven African countries, searching for safety – perpetually hungry, imprisoned and abused, enduring and escaping refugee camps, finding unexpected kindness, witnessing inhuman cruelty. They did not know whether their parents were dead or alive.

When Clemantine was twelve, she and her sister were granted refugee status in the United States, where she embarked on another journey, ultimately graduating from Yale. Yet the years of being treated as less than human, of going hungry and seeing death, could not be erased. She felt at the same time six years old and one hundred years old.

In The Girl Who Smiled Beads, Clemantine provokes us to look beyond the label of ‘victim’ and recognise the power of the imagination to transcend even the most profound injuries and aftershocks. Devastating yet beautiful, and bracingly original, it is a powerful testament to her commitment to constructing a life on her own terms.

The night before we taped the Oprah show, in 2006, I met my sister Claire at her apartment in a public housing unit in Edgewater, where she lived with the three kids she’d had before age twenty-two, thanks to her ex-husband, an aid worker who’d pursued her at a refugee camp. A black limo arrived and drove us to downtown Chicago, to the Omni Hotel, near where my sister used to work. I now can’t think about that moment without also thinking about my own naïveté, but at the time all I felt was elated.

I was eighteen, a junior at New Trier High School, living Monday through Friday with the Thomas family in Kenilworth, a fancy suburb. I belonged to the church youth group. I ran track. I’d played Fantine in the school production of Les Misérables. I was whoever anybody wanted me to be.

Claire, meanwhile, remained steadfast, herself, a seemingly rougher bargain. Unlike me, she was not a child when we got resettled in the United States, so nobody sent her to school or took her in or filled her up with resources – piano lessons, speech therapists, cheerleading camp. Claire just kept hustling. For a while she made a living throwing parties, selling drinks and hiring DJs who mixed American hip-hop, the Zairean superstar Papa Wemba, and French rap. But then she learned it was illegal to sell liquor without a license and she started working full-time as a maid, cleaning two hundred hotel rooms a week.

All I knew about the show we were taping was that it was a two-part series: the first segment showed Oprah and Elie Wiesel visiting Auschwitz, God help us; the second featured the fifty winners of Oprah’s high school essay contest. Like the other winners, I had written about Wiesel’s book Night, his gutting story of surviving the Holocaust, and why it was still relevant today. The book disarmed me. I found it thrilling, and it made me ashamed. Wiesel had words that I did not have to describe the experiences of my early life.

I’d dictated my essay to Mrs Thomas, as she sat in her tasteful Midwestern house – gracious lawn, mahogany floors – at a huge computer that took up the whole desk. ‘Clemantine,’ she’d said, ‘you have to enter. I just know you’ll win.’ Mrs Thomas had three children of her own, plus me. I called her ‘my American mother’ and she called me ‘my African daughter’. She packed my lunch every day and drove me to school.

On the way to downtown Chicago, Claire and I had the inevitable conversation – is this happening? this is so weird – which was as close as my sister and I got to discussing what had happened to our lives. If we absolutely had to name our past in each other’s presence, we’d call it ‘the war’. But we tried not to do that, and that day we were both so consumed by all the remembering and willful forgetting that when we arrived at the Omni and the bellhop asked, ‘Do you have any bags?’ we realised we’d left all our clothes at home.

Claire took the L back to her apartment, where a friend was watching her children – Mariette, who was almost ten; Freddy, who was eight; and Michele, who was five. I stayed in the hotel room, lost.

Harpo Studios gave us each a $150 stipend for dinner. It was more than Claire’s monthly food stamp allowance. When Claire returned we ordered room service. We woke at 4.00 a.m. and spent hours getting dressed.

That day, for the show, the producers directed us to the huge studio. Oprah sat onstage on a white love seat, next to tired old Elie Wiesel in a white overstuffed chair. He was alive, old but alive, which meant the world to me. He kept looking at the audience, like he had a lot to say but there was no time to say it.

In this nice studio, in front of all these well-dressed people, Oprah’s team played the video of Oprah and Elie Wiesel walking arm in arm through snow-covered Auschwitz, discussing the Holocaust.

Then the producers gave us a break. We sat in silence. Some of us were horrified and others were crying.

After that, Oprah said glowing things about all the winners of the essay contest except me. I told myself this was fine. Fine. I hadn’t really gone to school until age thirteen, and when I was seven I’d celebrated Christmas in a refugee camp in Burundi with a shoebox of pencils that I’d buried under our tent so that nobody would steal it. Being in the audience was enough, right? Plus, I kept wanting to say to Oprah: Do you know how many years, and across how many miles, Claire has been talking about meeting you?

But then Oprah leaned forward and said, ‘So, Clemantine, before you left Africa, did you ever find your parents?’

‘So when was the last time you saw them?’ she asked.

‘Well, I have a letter from your parents,’ Oprah said, as though we’d won a game show. ‘Clemantine and Claire, come on up here!’

Claire held on to me. She was shaking, but she kept on her toughest, most skeptical face, because she knows more about the world than I do, and also because she refused to think, even after all we’d been through, that anybody was better or more important than she was. When we were dirt poor and alone, she’d be in her seventh hour of scrubbing someone’s laundry by hand and she’d see on a TV an image of Angelina Jolie, swaggering and gleaming, radiating moral superiority, and even then Claire would say, ‘Who is that? God? You, you’re human. Nothing separates me from you.’

I have never been Claire. I have never been inviolable. Often, still, my own life story feels fragmented, like beads unstrung. Each time I scoop up my memories, the assortment is slightly different. I worry, at times, that I’ll always be lost inside. I worry that I’ll be forever confused. But that day I leapt up onto the set, smiling. One of the most valuable skills I’d learned while trying to survive as a refugee was reading what other people wanted me to do.

‘This is from your family, in Rwanda,’ Oprah said, handing me a tan envelope. She looked solemn, confident in her purpose. ‘From your father and your mother and your sisters and your brother.’

Claire and I did know that our parents were alive. We knew they’d lost everything – my father’s business, my mother’s garden – and that they now lived in a shack on the outskirts of Kigali. We talked to them on the phone, but only rarely because – how do you start? Why didn’t you look harder for us? How are you? I’m fine, thanks. I’ve been working at the Gap and I’ve found it’s much easier to learn to read English if you also listen to audiobooks.

I opened the envelope and pulled out a sheet of blue paper. Then Oprah put her hand on mine to stop me from unfolding the letter. It was a huge relief. I didn’t want to have a breakdown on TV.

I started walking backward. Claire’s jaw unhinged in a caricature of shock. Then a door that had images of barbed wire on it – created especially for this particular episode, I assume, to evoke life in an internment camp – opened stage right and out came an eight-year-old boy, who was apparently my brother. He was followed by my father, in a dark suit, salmon shirt, and tie; a shiny new five-year-old sister; my mother in a long blue dress; and my sister Claudette, now taller than me. I’d last seen her when she was two years old and I still believed my mother had picked her up from the fruit market.

I’d fantasised about this moment so many times. In Malawi, I used to write my name in dust on trucks, hoping my mother would see my loopy cursive Clemantine and realise that I was alive. In Zaire, I’d saved coins so I could buy my parents presents. In Tanzania, I’d collected marbles for my older brother, Pudi, who wasn’t there for this reunion. Pudi was dead.

The cameras were so far away that I forgot I was participating in a million-viewer spectacle, that my experience, my joy and pain, were being consumed by the masses, though I was aware enough to realise that everybody in the audience was crying.