Read an excerpt from Wolf Trap, the new novel from bestselling South African author Consuelo Roland
More about the book! 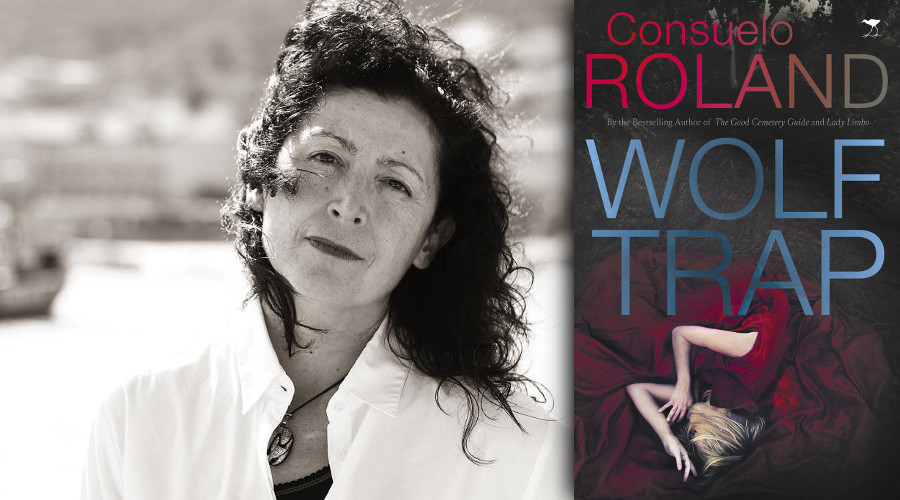 Consuelo Roland is the bestselling author of The Good Cemetery Guide and The Limbo Trilogy, a mystery-suspense series set in Camps Bay.

Paola Dante is a driven project manager employed by a large multinational information technology corporation who reads war strategy books for relaxation. In general she prefers computers to people with their random uncontrolled emotions. Long ago she made a decision that matters of the heart were inherently messy and should be kept at arm’s distance. But her husband had surprised her; she had no resistance against Daniel.

Now she sees herself as a survivor who has successfully moved on from the traumatic events and terrible truth surrounding her husband’s sudden disappearance years before. But the truth is that ever since the night he walked out on their marriage back to his old ways she’s found it hard to get on with normal life.

An unlikely and ill-equipped mother, she stands alone between their adopted daughter Simone and the criminal kingpin who wants the teenage girl for his own ends and has set the savage wolves on her.

To save her daughter − and herself − once and for all, Paola will face her every fear, her every mistake, and the past she thought she’d finally processed and left behind.

The Girl in the Chauffeured Car

The girl in the back seat stared out of the car window. Fields of wide-open sunflowers flashed by. In the background a grain silo built in stone rose against the cloudless blue sky. Occasionally through the trees – she thought they might be elms or poplars, but she couldn’t be sure – she caught a glimpse of a long flat ribbon of green that hardly stirred in the midday sun; somehow she thought the sluggish waterway would be teeming with strangely foreign insect life. Perhaps they had dragonflies in France. She’d tried to open the window to hear the outside world, and when it remained firmly shut she’d banged on the glass screen that separated her from the uniformed man in the driver’s seat. The chauffeur hadn’t even turned his head at the banging.

How had she got into this car? The last thing she remembered was waking up in a dingy hotel room in Paris.

She yelled at the driver that she was thirsty and banged again. Once she’d caught him looking at her in the rear-view mirror and she’d stuck her tongue out at him. So childish. All she’d succeeded in doing was almost breaking her hand. She’d tried to jump out at a set of traffic lights but the door hadn’t budged and her legs had felt too heavy to move. She refused to let him see her cry. She tried humming the only French song she knew, Frère Jacques, Frère Jacques, Dormez-vous? … but that reminded her of her friends and their antics in the classroom and it made her feel worse, so she closed her eyes and pretended to be asleep.

In the front, the chauffeur checked the car clock. She’d be easier to handle once the drugs took effect. How very pale her lashes were. She reminded him of a white rabbit he’d caught in a snare when he was a boy. In a panic, its pink eyes terrified, the rabbit had wrenched itself out of the wire noose and tried to hop away, blood streaming from where its severed foot had once been. It was rare, such unflawed fur, such perfect purity of colour. The young female rabbit must have escaped from the breeding cages. The blackened carcass that came out of the fire had had so little meat on it that he’d gone out to check the snares again but there was nothing else.

He watched as the pretty little girl on the back seat sank into oblivion, wondering not for the first time what happened to the ones that didn’t settle down. His hand slammed against the steering wheel. It wasn’t his business to ask such a question. He was here to deliver the goods, and get paid, that was it.

Anything else was looking for trouble.

The nausea was starting to pass. On the fifth day she’d decided she would have to eat to keep her strength up. ‘The young are always hungry,’ the woman had said, pleased that she was cooperating. The food was surprisingly good and brought in on a tray each day. Everything was plastic: the plate and the knife and fork, even the glass. ‘I prepare it myself,’ the woman had said. ‘Everything is fresh. How pretty you are …’

The next morning a younger woman had come in and out to fill a tin bath with buckets of warm water while the other woman stood guard by the open door. She’d decided to eat her breakfast because she was hungry and her feet were tied to the chair anyway. She’d refused to get undressed. The room began to swim around her. She’d been stupid … the sweet tea … Now that she was docile, the two women worked together quickly to remove her jeans and panties and T-shirt. They lifted her into the half-filled bath, seating her upright like a naked doll. Her shivering body felt like somebody else’s. The woman ran the soap over her breasts, laughing as the small cold nipples rose to her touch; the younger woman ignored her pleading gaze and shifted her legs apart, strong fingers holding, reaching down, washing her below, front and back, escaping from the soapy cloth, sliding deep inside. They’d poured pitchers of water over her face to rinse her hair, nearly drowning her. Exhausted, she’d let them dress her in a clean set of her own clothes − where had they come from? − and comb the tangles out of her wet hair, and then they’d taken their tin bath and left her in peace. Later the woman had tried to brush her hair and she’d spat at her and the woman had slapped her. She’d fallen against the commode and bruised her face. ‘Foolish girl,’ the woman had said as she applied an ice pack. ‘Now you’ll have to stay longer. We can’t send you away looking like that.’

After that she’d been given nothing but bread and water for several days until she’d pretended to be unconscious and a man in gumboots covered with black earth had come up to see her. She’d heard him shouting at the woman that le patron had paid a lot of money for a plump poussin; what would he say if they sent him a wasted bag of bones! The woman used a real spoon to feed her a light broth with bits of curdled egg. ‘I have put a whole egg in,’ the woman said, ‘collected this morning. Eat. You will need your strength.’ It was delicious, but she only managed a few spoonfuls.

The farmer came back the day after – she presumed him to be the woman’s husband. He told her that if she didn’t behave herself they’d have to drug her again, as when they brought her here, so she’d behaved. At least until the rope was off. The new chauffeur had removed the rope around her wrists once she was in the car. She’d tried to bite him, but her reflexes were dull and he was quick as a snake; he’d grabbed both her wrists and yanked her out towards him. ‘Le patron will be pleased – it’s been a while since he had one with spirit,’ the chauffeur had said. In the background she could hear French crickets singing their one-tone hearts out. She spat at the man but he was faster than she was, twisting her round so that his lunch onion-breath was hot against her ear. ‘Merde …’ the soft voice menaced. ‘It will give me great pleasure to break you in. But if you try anything again I will truss you up comme un petit oiseau … And if I have to wring your pretty little neck nobody will miss you. So are we clear?’ He shoved her in with a push and closed the door without banging it before sliding into his seat, all in one smooth fluid motion. A grimy toddler standing in a doorway had waved at them with a handful of bread crust as the sleek black car pulled away past him. They travelled on narrow winding country roads. Occasionally in the distance she’d see a highway full of cars and trucks flashing by, silver streaks as they caught the sunlight.

It could have been a dream.