Read an excerpt from John Grisham’s latest novel Sooley – an intensely moving story with a deeply compelling central character
More about the book! 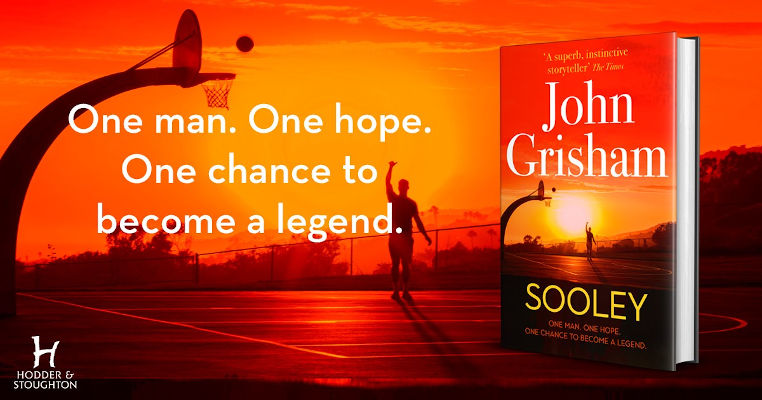 Global bestseller John Grisham takes you to a different kind of court in Sooley, a gripping novel that showcases his storytelling powers in an entirely new light.

One man. One hope. Once chance to become a legend.

ONE MAN
Seventeen-year-old Samuel Sooleyman comes from a village in South Sudan, a war-torn country where one third of the population is a refugee. His great love is basketball: his prodigious leap and lightning speed make him an exceptional player. And it may also bring him his big chance: he has been noticed by a coach taking a youth team to the United States.

ONE HOPE
If he gets through the tournament, Samuel’s life will change beyond recognition. But it’s the longest of long shots. His talent is raw and uncoached. There are hundreds of better-known players ahead of him. And he must leave his family behind, at least at the beginning.

ONE CHANCE
As American success beckons, devastating news reaches Samuel from home. Caught between his dream and the nightmare unfolding thousands of miles away, ‘Sooley’, as he’s nicknamed by his classmates, must make hard choices about his future. This quiet, dedicated boy must do what no other player has achieved in the history of his chosen game: become a legend in twelve short months.

In April, when Samuel Sooleymon was invited to try out for the national team, he was seventeen years old, stood six feet two inches tall, and was considered to be a promising point guard, known for his quickness and vertical leap, but also for his erratic passing and mediocre shooting.

In July, when the team left Juba, the capital of South Sudan, for the trip to America, he was six feet four inches tall, just as quick but even more erratic handling the ball and no more accurate from the arc. He was hardly aware of his growth, which was not unusual for a teenager, but he did realize that his well-worn basketball shoes were tighter and his only pair of pants now fell well above his ankles.

But back in April when the invitation arrived, his neighborhood erupted in celebration. He lived in Lotta, a remote village on the outskirts of Rumbek, a city of 30,000. He had spent his entire life in Lotta doing little more than playing basketball and soccer. His mother, Beatrice, was a homemaker, with little education, like all the women in the village. His father, Ayak, taught school in a two-room open-air hut built by some missionaries decades earlier. When Samuel wasn’t pounding the basketball on the dirt courts throughout the village, he tended to the family’s garden with his younger siblings and sold vegetables beside the road.

For the moment, life in the village was good and fairly stable. Another brutal civil war was in its second year with no end in sight, and though daily life was always precarious, the people managed to make it through the day and hope for better things tomorrow. The children lived in the streets, always bouncing or kicking a ball, and the games offered a welcome diversion.

Since the age of thirteen, Samuel had been the best basketball player in the village. His dream, like every other kid’s, was to play college ball in America and, of course, make it to the NBA. There were several South Sudanese players in the NBA and they were god-like figures back home.

When the news of his invitation spread through the village, neighbors began gathering in front of the Sooleymons’ thatched-roof hut. Everyone wanted to celebrate Samuel’s breathtaking news. Ladies brought pitchers of cinnamon tea spiced with ginger and jugs of tamarind juice. Others brought platters of sugar-coated cookies and peanut macaroons. It was the greatest moment in the village’s recent history, and Samuel was hugged and admired by his neighbors. The little ones just wanted to touch him, certain that they were in the presence of a new national hero.

He savored the moment but tried to caution everyone that he had only been invited for tryouts. Making the Under 18 team would be difficult because there were so many good players, especially in Juba, where the leagues were well established and the games were played on tile or even wood floors. In Lotta, like other remote villages and rural areas, the organized games were often played outdoors on concrete or dirt. He explained that only ten players would be chosen for the trip to America, and there they would be joined by five more players, all from South Sudan. Once combined, the team would play in showcase tournaments in places like Orlando and Las Vegas, and there would be hundreds of college scouts. Perhaps a few from the NBA as well.

Talk of playing in America added more excitement to the occasion, and Samuel’s cautions were ignored. He was on his way. They had watched him grow up on the village courts and knew he was special enough to make any team, and to take their dreams with him. The celebration lasted well into the night, and when Beatrice finally ended it, Samuel reluctantly went to bed. But sleep was impossible. For an hour, he sat on his cot in his tiny bedroom, one that he shared with his two younger brothers, Chol and James, and whispered excitedly with them. Above their cots was a large poster of Niollo, the greatest of all South Sudanese players, soaring high above the rim and slamming a dunk in his Boston Celtics uniform, one which Samuel often fantasized wearing.
He rose early the next morning and collected eggs from the family’s flock of chickens, his first chore of the day. After a quick breakfast, he left for school with his backpack and his basketball. James and Chol followed him to their neighborhood court where he shot for an hour as they retrieved the ball and fed it back to him. Other boys joined them, and the familiar noise of bouncing balls and friendly banter echoed through the sleepy morning.

At eight o’clock, the games reluctantly broke up as Samuel and his brothers left for classes. He was in his last year of secondary school and would graduate in a month. He considered himself fortunate. Less than half of his peers – boys only – would finish secondary, and only a fraction even dreamed of university. There were no classes for the girls.

As Samuel dribbled off to school, his dreams were now drifting to colleges far away.

Two weeks later, early on a Friday morning, the entire family made the long walk to the bus station in Rumbek and watched him leave for Juba and a long weekend of vigorous competition. They waved him off, with his mother and sister in tears. He would return the following Monday.

The departure was an hour late, which for South Sudan was quite prompt. Because of bad roads and crowded buses, the schedules were flexible. Often there was no bus at all and breakdowns were common. It was not unusual for a bus to quit in the middle of the road and its passengers be sent off on foot to the nearest village.

Samuel sat on a crowded bench in the front of the bus, wedged between two men who said they had been riding for three hours. They were headed to Juba to look for work, or something like that. Samuel wasn’t certain because their English was broken and mixed with Nuer, their tribal tongue. Samuel was Dinka, the largest ethnic class in the country, and that was his first language. English was his second. His mother spoke four.

Across the narrow aisle was a woman with three children, all of them wide-eyed and silent. Samuel spoke to them in English but they did not respond. The mother said something to the oldest child and Samuel understood none of it.

The bus had no air-conditioning and dust from the gravel road blew through the open windows and settled onto everything—clothing, bags, benches, the floor. It rocked and bumped along the main gravel road to Juba, occasionally stopping to pick up a hitchhiker or let off a passenger.

Once it was known that Samuel was a basketball player who just might be headed to games in America, he became the focus of attention. Basketball was the new pride of South Sudan, a bright promise that sometimes allowed the people to set aside their violent history of ethnic conflict. Generally, the players were lean and tall and they played with a fierceness that often surprised American coaches.

So they talked basketball, with Samuel holding forth. They stopped in every village and took on more passengers. Full capacity was a moving target and before long the younger men, including Samuel, were ordered by the driver to crawl on top of the bus for the ride and to make sure none of the bags and boxes fell off. As they approached Juba, the gravel turned to asphalt and the constant bumping eased somewhat. The passengers grew quiet as they passed miles of shantytowns, then blocks of sturdier homes. Six hours after he left Lotta, Samuel got off the bus at the central station where swarms of people were coming and going. He asked directions and walked for an hour to the University of Juba.

He had been to Juba once before and was again struck by its modern facilities, paved streets, frantic traffic, tall buildings, vibrancy, and well-dressed people. If he failed to make the team, he planned to continue his studies in the city. If at all possible, he wanted to live there and pursue a profession.

He found the campus and then the gym and stepped nervously inside. It was new, cavernous, with three full-length courts and few bleachers. There were no intercollegiate sports in the country, no college teams with schedules and logos, no fans to watch the excitement. The gym was used for intramural sports of all varieties, and for assemblies and rallies.

At the far end he saw a man with a clipboard and a whistle tied around his neck, watching a four-on-four scrimmage. Samuel walked around the court and approached him.