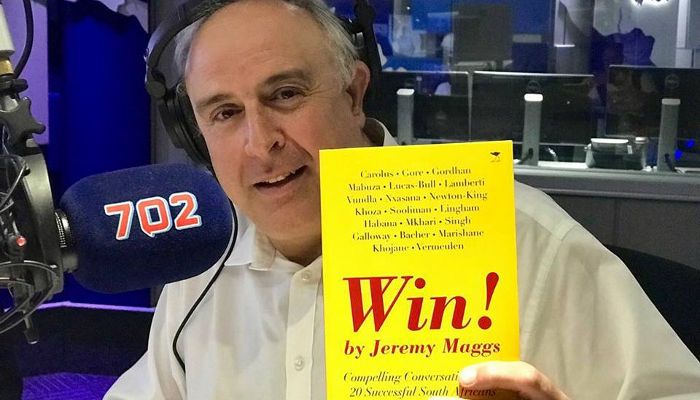 Imagine learning from South Africa’s best of the best in their respective fields – be it business, sport, politics, entertainment or philanthropy – and having access to decades of experience in strategic planning, business and change management, human resources development, and the nitty-gritty of building a personal brand that extends to your business and everyone you employ.

Look no further than the 200 pages of Win! Inspiring Interviews with SA’s Top 20 Leaders.

In this interview, Maggs chats to Cheryl Carolus:

This is the success story of a committed South African activist, politician, diplomat and business leader who once a year deep cleanses her life by deleting people in her address book who add no value, optimism or inspiration.

In a swirl of noise and energy, Cheryl Carolus arrives twenty minutes late and immediately owns the room, kissing everybody, shaking hands, ordering coffee and inquiring about collective general health in one long jumbled high-octane sentence.

By way of excuse she says she’s been cajoling politicians to, in her words, “grow a pair” and do something about the parlous state of both the country and the economy.

It’s easy to forgive this transgression of tardiness in the interests of affairs of state.

She dives straight into her favourite topic – the country – before I can even seed the conversation, saying she’s an eternal optimist but is deeply concerned about how systemically and deeply the rot is entrenched.

“Something has gone wrong with the soul of this nation and I think we’ve all let it go on for too long. For middle-class people it’s actually fine because we’ve privatised our safety and security with our response units; we’ve privatised our children’s school care, sending them to private institutions, schools; we’ve privatised our healthcare with the fabulous health plans we have and so our tolerance level for what nonsense we’re prepared to put up with actually just keeps on shifting out.

“But what’s been great has been this nuclear action of President [Jacob] Zuma leaving us under such a cloud it has jolted people to want to seize back power. I sense right now there’s a much stronger sense of civil society rejuvenating itself. Now it’s a question of how we make an impact on my organisation, the ANC, and actually get members to understand they should not take voters for granted.”

I decide to let this high-speed political spinnaker run a little longer before we get to the notion of success.

So what does all of this political negativity mean as a portent for the next couple of years and does she still hold on to the optimism she’s held for so long in her life?

“I don’t think we’re going to be out of the woods fully, even when President Zuma is gone. It’s about the values on which the next set of leaders in the ANC are going to be elected. I think it’s going to be turbulent and messy. This boil is so big and there’s so much filth around it we’re going to have to cut deep and lance it quite clinically.”

I see an opportunity for a clever segue here before we get too physiological. What should successful people be doing in times like this when there is so much turbulence? What responsibilities do we all have? Cheryl, not missing a beat or drawing breath, says it’s about the P-word. Power.

“People like you and me have power to make and influence change. The big mistake we’ve made since democracy dawned is we think only the State has the power to mess us around, to make us happy, to look after us. Not at all. We have that power. We have to use it.”