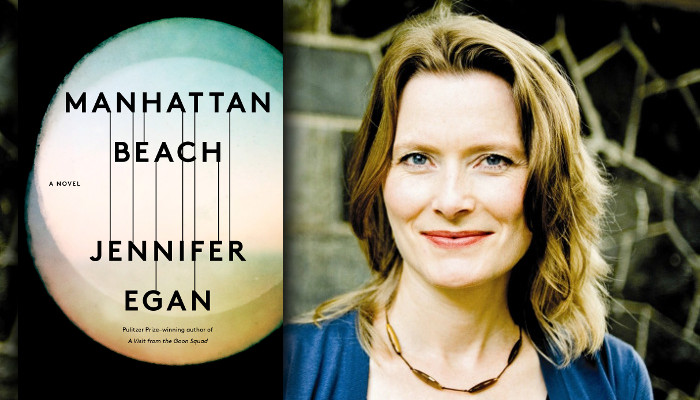 Manhattan Beach is the long-awaited novel from Jennifer Egan, the Pulitzer Prize-winning author of A Visit from the Goon Squad.

Manhattan Beach takes place during the World War II era and tells the haunting and propulsive intertwined stories of heroine Anna Kerrigan, the Brooklyn Navy Yard’s only female diver, her father Eddie Kerrigan, who works for both the union and the mob, and nightclub owner Dexter Styles, Eddie’s complex and charismatic boss.

Manhattan Beach is Egan’s fifth novel. In an interview with the New Yorker, Egan chatted about the pressure that comes with writing every new book.

‘Fiction has a magical quality to it, in the sense that none of us really knows where it comes from. It’s like dreaming,’ she says. ‘Well, what if you just stop dreaming? There’s no one to promise us that that won’t happen.’

Listen to the podcast here:

It all started with seeing the girl. Anna had gone outside to buy lunch over the disapproval of her supervisor, Mr. Voss, who liked them to bring their lunches from home and eat them on the same tall stools where they sat measuring all day. Anna sensed anxiety in his wish to keep them in sight, as if girls at large in the Naval Yard might scatter like chickens. True, their shop was pleasant to eat in, clean and brightly lit by a bank of second-story windows. It had conditioned air, a humming chill that had filled every corner during the hot September days when Anna first came to work there. Now she would have liked to open a window and let in the fresh October air, but the windows were permanently shut, sealing out dust and grime that might affect the measurements she and the other girls took—or was it that the tiny parts they were measuring needed to be pristine in order to function? No one knew, and Mr. Voss was not a man who welcomed questions. Early on, Anna had asked of the unrecognizable parts in her tray, “What are we measuring, exactly, and which ship are they for?”

“It would help me to do it better.”

“I would know what I was doing.”

The marrieds hid their smiles. Anna had been cast—or cast herself—in the role of unruly kid sister, and was enjoying it immensely. She found herself looking for little ways to challenge Mr. Voss without risking outright insubordination.

“You are measuring and inspecting parts to ensure that they are uniform,” he said patiently, as if to a halfwit. “And you are setting aside any that are not.”

Soon it came to be known that the parts they were inspecting were for the battleship Missouri, whose keel had been laid almost a year before Pearl Harbor in Dry Dock 4. Later, theMissouri’s hull had been floated across Wallabout Bay to the building ways: vast iron enclosures whose zigzagging catwalks evoked the Coney Island Cyclone. Knowing that the parts she was inspecting would be adjoined to the most modern battleship ever built had indeed brought some additional zest to the work for Anna. But not enough.

Don’t miss an evening with Prue Leith in Cape Town (PLUS a cooking demonstration!) (5 Feb)

Join Hassen Ebrahim for the launch of his memoir Marabastad to Mogadishu: The Journey of an ANC Soldier at Love Books (29 Jan)