Read an excerpt from Every Breath, the new novel from Nicholas Sparks, bestselling author of The Notebook
More about the book! 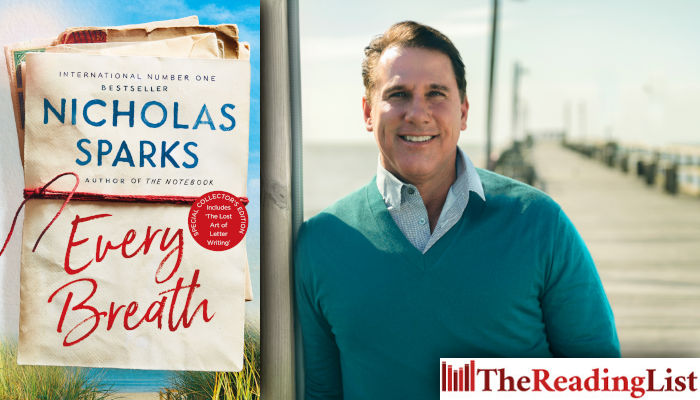 There are times when destiny and love collide. This story is one of them.

Hope Anderson is at a crossroads. After six years with her boyfriend, she is no longer sure what she wants, and when her father becomes ill she heads to her family’s cottage at Sunset Beach in North Carolina to make some difficult decisions.

Tru Walls has been summoned across an ocean from where he was born and raised in Zimbabwe by a letter from a man claiming to be his father. In journeying to Sunset Beach, Tru hopes to unravel the mystery surrounding his mother’s life, but the letter will lead him in an unexpected direction.

When these two strangers’ paths cross, their chance encounter sets in motion a heart-breaking story – one that will transcend decades, continents and the workings of fate.

Illuminating life’s heartbreaking regrets and enduring hope, Every Breath explores the many facets of love that lay claim to our deepest loyalties – and asks the question, How long can a dream survive?

There are stories that rise from mysterious, unknown places, and others that are discovered, a gift from someone else. This story is one of the latter. On a cool and blustery day in the late spring of 2016, I drove to Sunset Beach, North Carolina, one of many small islands between Wilmington and the South Carolina border. I parked my truck near the pier and hiked down the beach, heading for Bird Island, an uninhabited coastal preserve. Locals had told me there was something I should see; perhaps, they’d even suggested, the site would end up in one of my novels. They told me to keep my eye out for an American flag; when I spotted it in the distance, I’d know I was getting close.

Not long after the flag came into view, I kept my eyes peeled. I was to look for a mailbox called Kindred Spirit near the dunes. The mailbox – planted on a pole of aging driftwood near a saw grass–speckled dune – has been around since 1983 and belongs to no one and everyone. Anyone can leave a letter or postcard; any passerby can read whatever has been placed inside the mailbox. Thousands of people do so every year. Over time, Kindred Spirit has been a repository of hopes and dreams in written form … and always, there are love stories to be found. The beach was deserted. As I approached the isolated mailbox on its lonely stretch of shoreline, I could just make out a wooden bench beside it. It was the perfect resting place, an outpost of reflection.

Reaching inside the mailbox, I found two postcards, several previously opened letters, a recipe for Brunswick stew, a journal that appeared to have been written in German, and a thick manila envelope. There were pens, a pad of unused paper, and envelopes – presumably for anyone who was inspired to add their own story to the contents. Taking a seat on the bench, I perused the postcards and the recipe before turning to the letters. Almost immediately, I noticed that no one used last names. Some of the letters had first names, others had only initials, and still others were completely anonymous, which only added to the sense of mystery.

But anonymity seemed to allow for candid reflection. I read about a woman who, in the aftermath of a struggle with cancer, had met the man of her dreams at a Christian bookstore, but worried that she wasn’t good enough for him. I read about a child who hoped to one day become an astronaut. There was a letter from a young man who planned to propose to his sweetheart, and still another from a man who was afraid to ask his neighbor on a date for fear of rejection. There was a letter from someone recently released from prison who wanted nothing more than to start his life over. The final missive was from a man whose dog, Teddy, had recently been put to sleep. The man was still grieving and after finishing the letter, I studied the photograph of a black Labrador retriever with friendly eyes and a graying muzzle that had been tucked inside the envelope. The man had signed his name AK, and I found myself hoping he would find a way to fill the void that Teddy’s absence had left behind.

By then, the breeze was steady and the clouds had begun to darken. A storm was rolling in. I returned the recipe, postcards, and letters to the mailbox and debated opening the manila envelope. The thickness indicated a substantial number of pages, and the last thing I wanted was to get caught in the rain as I trekked back to my truck. Flipping over the manila envelope as I debated, I saw that someone had printed on the back, The Most Amazing Story Ever!

A plea for recognition? A challenge? Written by the author or someone who’d examined the contents? I wasn’t sure, but how could I resist?

I opened the clasp. Inside the envelope were a dozen or so pages, photocopies of three letters, and some photocopied drawings. I set those aside and reached for the story. The first line made me pause:

The destiny that matters most in anyone’s life is the one concerning love.