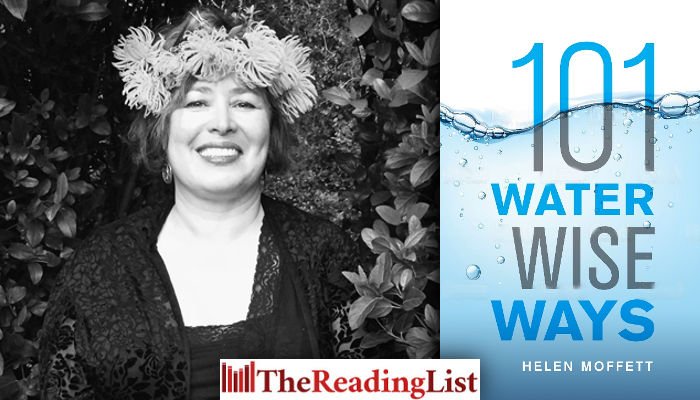 101 Water Wise Ways by Helen Moffett – an essential guide for those dealing with the Cape water crisis and for general water saving in South and southern Africa, a notoriously water-scarce region.

Three provinces in South Africa have been declared national disaster zones because of drought. The way we think about water needs to change, and fast.

This is especially true for those of us who have running water and flush sanitation piped into our homes. For millions of South Africans, water is already a precious resource that costs toil to collect and fuel to heat. Our middle-class expectations that water will gush steaming from our dozens of indoor taps 24/7 are going to look as bizarre to future generations as the spectacle of Cleopatra bathing in asses’ milk. Our Roman-orgy relationship with water is over.

101 Water Wise Ways will hopefully help to alleviate water panic and distress. A ‘can-do’ compendium, it’s meant to be a guide, not prescriptive – not all solutions or tips are one-size-fits-all. Think of it as an ally in your fight to save water and part of your survival kit, along with the first-aid box; Valium for water-worriers.

101 Water Wise Ways will be out from Bookstorm in April.

Helen Moffett is a poet, editor, feminist activist and academic, her publications include university textbooks, an anthology of landscape writings, a cricket book (with the late Bob Woolmer and Tim Noakes), an animal charity anthology (Stray, with Diane Awerbuck) and the Girl Walks In erotica series (with Sarah Lotz and Paige Nick under the nom de plume Helena S Paige). She has also published two poetry collections – Strange Fruit (Modjaji Books) and Prunings (uHlanga Press), which won the 2017 SALA prize. Recent projects include the Short Story Day Africa anthology, Migrations, and a memoir of Rape Crisis. She lives in Noordhoek, Cape Town.