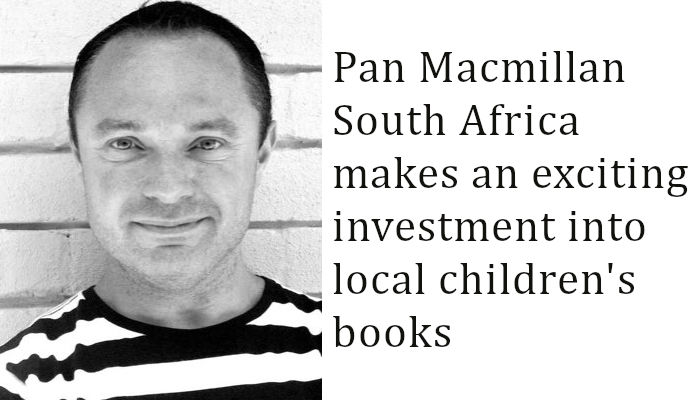 Pan Macmillan South Africa is delighted to announce its new publishing initiative focused on contributing to the growth and development of the local children’s book industry.

Miemie du Plessis, local children’s book expert and veteran publisher with 27 years of experience in the industry, has been appointed as the Children’s Publisher and will be the driving force behind this initiative. Miemie will step into this role on 1 September 2019.

In addition, Pan Macmillan South Africa is thrilled to welcome Jaco Jacobs, bestselling author, to the list with his first titles to be released in 2020. Jacobs and Du Plessis are a formidable writer-publisher team that has produced many bestsellers over the past 18 years.

Jaco Jacobs is arguably the most popular children’s book author in Afrikaans today, having written more than 170 titles. His books have sold more than one million copies locally and have been translated into English and Italian. Jacobs has been awarded, among others, the Alba Bouwer Prize, the Scheepers Prize, the CP Hoogenhout Prize and 29 ATKV-Woordveertjies and was long-listed for the UK’s Carnegie Medal in 2018.

Miemie du Plessis began her book career working for as a librarian before becoming a children’s publisher. Miemie has published hundreds of children’s books and developed many authors. She is well respected across the local and international publishing industry.

Pan Macmillan South Africa is part of the Macmillan group, a global publisher operating in more than 70 countries. The South African company is not only a distributor of prominent international titles and imprints with a strong focus on children’s books, but also a leading local publisher.

Terry Morris, managing director of Pan Macmillan South Africa said, ‘Given our strong market share in children’s books with our international lists, the next logical step is to focus on and nurture a local children’s imprint.

‘We’ve admired the depth and quality of Miemie’s work with local authors over many years, and there is no stronger partnership with which to launch this list than the incredible Jaco Jacobs and Miemie du Plessis.

‘In addition to the publication of Jacobs’s work, Miemie will also focus on developing the voices of a diverse range of authors across Afrikaans, English and other South African languages.’

Jaco Jacobs added, ‘The team at Pan Macmillan is really passionate about local authors and content, and I am excited to work with the company. It is also a privilege to continue my writing under the competent supervision of Miemie du Plessis, who has helped to shape my career over the years.’

Miemie du Plessis commented, ‘There is already a variety of exciting titles by local authors lined up for next year. Jaco Jacobs’ fans can look forward to an action-packed, laugh-out-loud adventure about a boy whose grandfather catches a zombie virus, a brand-new anthology of poetry, and a new series of stories for younger readers. The Zackie Mostert series will also appear in English for the first time as Zack Attack.’