Out now! Legacy of War by Wilbur Smith, the action-packed new book in the Courtney Series and the sequel to Courtney’s War
More about the book! 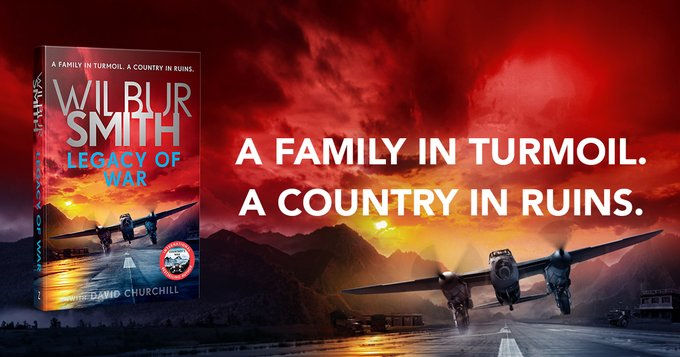 Legacy of War, the new novel by Wilbur Smith and David Churchill, is out now from Jonathan Ball Publishers!

Legacy of War is a nail-biting story of courage, bravery, rebellion and war from the master of adventure fiction.

The war is over, Hitler is dead – and yet his evil legacy lives on. Saffron Courtney and her beloved husband Gerhard only just survived the brutal conflict, but Gerhard’s Nazi-supporting brother, Konrad, is still free and determined to regain power.

As a dangerous game of cat-and-mouse develops, a plot against the couple begins to stir. One that will have ramifications throughout Europe …

Further afield in Kenya, the last outcrop of the colonial empire is feeling the stirrings of rebellion. As the situation becomes violent, and the Courtney family home is under threat, Leon Courtney finds himself caught between two powerful sides – and a battle for the freedom of a country.

Wilbur Smith is a worldwide phenomenon. His readership has built up over 55 years of writing.

Born in Central Africa in 1933, Wilbur became a full-time writer in 1964 following the success of When the Lion Feeds, and has since published over 40 global bestsellers, including the Courtney Series, the Ballantyne Series, the Egyptian Series, the Hector Cross Series and many successful standalone novels, all meticulously researched on his numerous expeditions worldwide.

The establishment of the Wilbur & Niso Smith Foundation in 2015 cemented Smith’s passion for empowering writers, promoting literacy and advancing adventure writing as a genre. The foundation’s flagship programme is the Wilbur Smith Adventure Writing Prize.