New updated edition: Fruit of a Poisoned Tree: The Inge Lotz Murder and a Miscarriage of Justice by Antony Altbeker
More about the book! 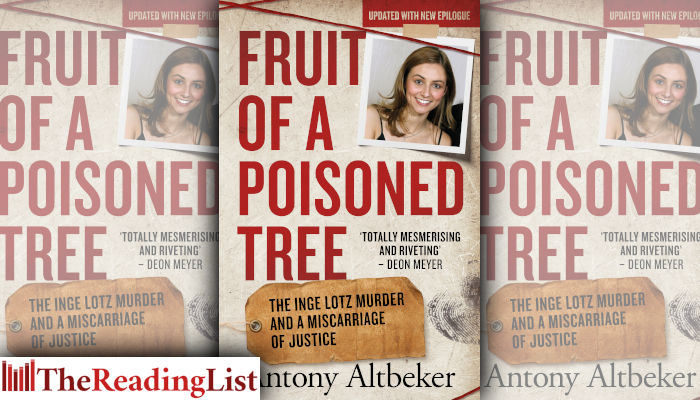 A new edition of Antony Altbeker’s Fruit of a Poisoned Tree: The Inge Lotz Murder and a Miscarriage of Justice, updated with new epilogue, is out now from Jonathan Ball Publishers.

In 2005, Fred van der Vyver, a young actuary and the son of a wealthy Eastern Cape farming family, was charged with murdering his girlfriend, Inge Lotz, allegedly bludgeoning her to death with a hammer as she lay on a couch in her lounge. The case against Van der Vyver seemed overwhelming. His behaviour at the time of the murder appeared suspicious and the forensic evidence seemed to prove his guilt.

And yet, in one of the most sensational and controversial murder trials in South African legal history, Van der Vyver’s lawyers sought to turn the table on the police, accusing them of fabricating evidence and lying to the judge.

Prize-winning author Antony Altbeker takes you into the heart of the epic courtroom battle.

His eye-witness account of the trial presents the reader with all the evidence and testimony while also placing it in the context of a society and justice system that are being stretched to breaking point.

This new edition has been updated with the tale of the remarkable events that followed the judge’s verdict.

Fruit of a Poisoned Tree is Antony Altbeker’s third book about crime and justice in South Africa. His first, The Dirty Work of Democracy, won the Recht Malan Prize for non-fiction and was shortlisted for the Sunday Times Alan Paton Award. His second, A Country at War with Itself, is widely regarded as the most authoritative popular account of the causes of South Africa’s crime problem and of what to do to fix it.