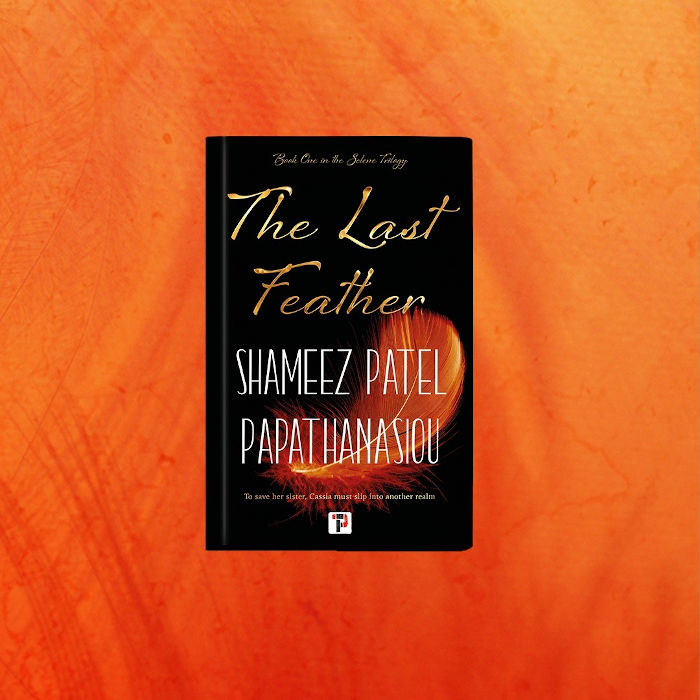 The Last Feather, the first book in the Selene Trilogy by Shameez Patel Papathanasiou, is out now from Jonathan Ball Publishers!

‘Papathanasiou debuts and launches the Selene Trilogy with a fierce, appealing story of determination, magical spells, and the bonds of friendship. [Her] talent for writing resolute characters makes her diverse cast sing, and she infuses Cassia’s adventure with emotion. This enchanting portal fantasy will have readers hooked.’ – Publishers Weekly

‘Teen readers will enjoy this tale of a stubborn, clever heroine mixed up with court politics, magic, and a hint of romance.’ – Starred review, Booklist

‘Fans of Catherynne M Valente’s Fairyland series will find a heroine of similar stubbornness, cleverness, and loyalty in a grown-up setting, while Sarah J. Maas or Laurell K. Hamilton enthusiasts will enjoy the fantasy politics, magic, and hints of romance.’ – Starred review, Booklist

Twenty-two-year-old Cassia’s sister is dying, and she doesn’t know why. Cassia wakes up in another realm to find her missing best friend, Lucas, who knows how to save her sister.

Lucas is part of a community of Reborns, people who were born on earth and after death, were reborn in this realm with magical abilities. The original beings of the realm, the Firsts, rule over them.

To keep the Reborn numbers manageable, the king of the Firsts releases a curse to cull them. Cassia needs to break the curse before her time runs out and she is trapped there forever.

Shameez Patel Papathanasiou was born and raised in Cape Town, South Africa. She is a civil engineer by day, fantasy author by night and a choc-chip cookie fiend somewhere in between. Her literary adventures take her to new worlds filled with magic, monsters and someone to fall in love with.