New book alert! The ANC Billionaires – Pieter du Toit examines ‘the party of government and patronage’
More about the book! 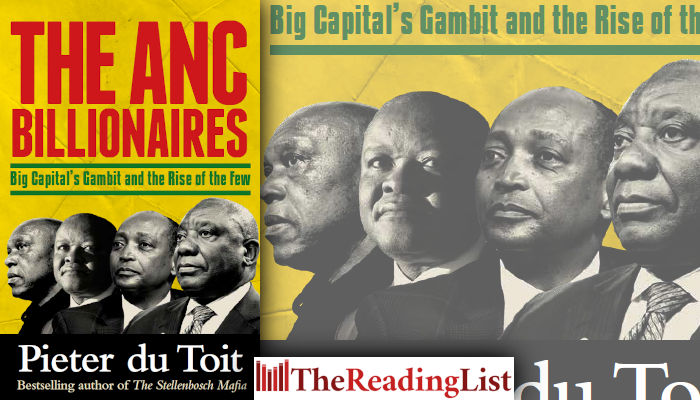 The ANC Billionaires: Big Capital’s Gambit and the Rise of the Few by Pieter du Toit is out in October by Jonathan Ball Publishers.

‘We were talking about the rise of Japan, about Ronald Reagan’s Star Wars … globalisation, technology. And they were still banging on about the Freedom Charter.’ – Anglo American’s Michael Spicer on the ANC in the mid-1980s

In September 1985 a group of white South African business leaders travelled to a game lodge in Zambia to meet with the exiled ANC leadership under Oliver Tambo and Thabo Mbeki. The group wanted to establish for themselves who and what the ANC was, and they were led by Gavin Relly, executive chairperson of Anglo American.

The Zambian visit set in motion a coordinated and well-resourced plan by big business to influence political change in South Africa. After the ANC was unbanned, their goal was to ensure the party did not turn the country into a last outpost of socialism.

In The ANC Billionaires top-selling author Pieter du Toit investigates whether secret deals were struck between capital and the liberation movement to ensure the status quo remains in terms of economic policy. He also shows how the ANC was completely unprepared to navigate the intersection between business and politics.

The book draws on first-hand accounts by major role players about the contentious relationship between capital and the ANC before, during and after the country’s transition to democracy.

It also sheds light on the millionaires and billionaires who have benefited from their relationship to the party, and with business. After 1994, a cadre of politically connected businessmen, such as Tokyo Sexwale, Cyril Ramaphosa, Saki Macozoma and Patrice Motsepe, emerged who had access to preferential empowerment deals brokered by companies like Anglo American – all became very wealthy.

The one thing these individuals have in common is the ANC – the party of government and patronage.

Pieter du Toit is a journalist with News24, where he is assistant editor for investigations. The ANC Billionaires is his third book with Jonathan Ball Publishers. Enemy of the People appeared in 2017, which he co-authored with Adriaan Basson, and The Stellenbosch Mafia was published in 2019. Both previous books were bestsellers, with The Stellenbosch Mafia occupying the number one spot on the Nielsen South Africa chart in the first week of its release. After attending school and university in Stellenbosch, he went on to work for various titles at Media24, including as a crime reporter in Pretoria, parliamentary correspondent in Cape Town and news editor in Johannesburg. He lives in Johannesburg with his family.

My new book, 'The ANC Billionaires: Big Capital's Gambit and the Rise of the Few' tracks how capital influenced the ANC, how it helped direct the transition, and the rise of a few connected politician-billionaires. Out on 31 October from Jonathan Ball Publishers. pic.twitter.com/0ESrpGTDpY