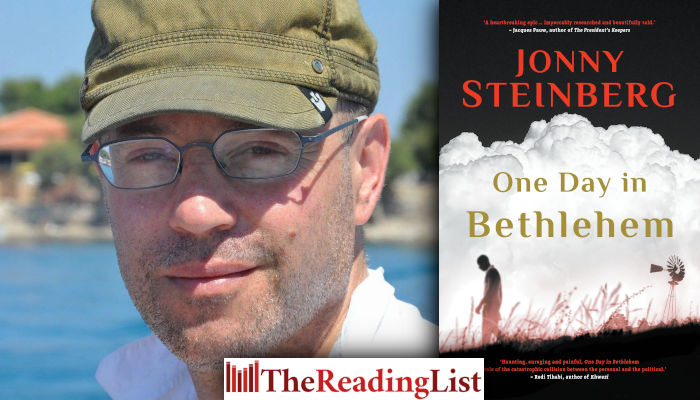 One Day In Bethlehem, the new book by Jonny Steinberg, is out now from Jonathan Ball Publishers.

‘Haunting, enraging and painful, One Day In Bethlehem is a tale of the catastrophic collision between the personal and the political.’ – Redi Tlhabi, author of Khwezi

‘South Africa’s foremost chronicler of the implications of our racist past for ordinary people has returned to luminously reveal the depressing reality of the country’s criminal justice system.’ – Judge Dennis Davis

A bakkie full of men armed with AK-47s is stopped by two policemen on the outskirts of Bethlehem in the Free State. The men open fire on the policemen and, from that moment, their lives are irrevocably changed. So too for Fusi Mofokeng, a resident of Bethlehem, who was not in the bakkie but happened to be the brother-in-law of one of the perpetrators. He and his drinking buddy, Tshokolo Mokoena, are accused of being accomplices and are tried, sentenced and jailed.

Nineteen years later, in 2011, Fusi is released into the world that has changed beyond recognition, a world in which his mother, father and brother have all died. Throughout his incarceration he fought for his release, appearing before the TRC, and schooling himself in law. Even today, he seeks a presidential pardon.

It is to this life that award-winning author Jonny Steinberg turns his attention in One Day In Bethlehem. In examining the life and struggle of Fusi Mofokeng, Steinberg shines a searching light on the burden of the ‘everyman’ in his quest for justice. In doing so, he also captures a country as it violently sheds the skin of the past to emerge, blinking, into the modern era.

Jonny Steinberg was born and raised in South Africa. He is twice winner of the Sunday Times Alan Paton Award and an inaugural winner of the Windham-Campbell Prizes in Literature awarded by Yale University. Steinberg was educated at Wits University and Oxford University. He teaches at Oxford’s African Studies Centre and is visiting professor at the Wits Institute for Social and Economic Research (WiSER). His previous books include A Man of Good Hope, The Number and Midlands.