New book alert! Future Tense by Tony Leon – ‘The hope for a better country remains an improbable, but not an impossible, dream’
More about the book! 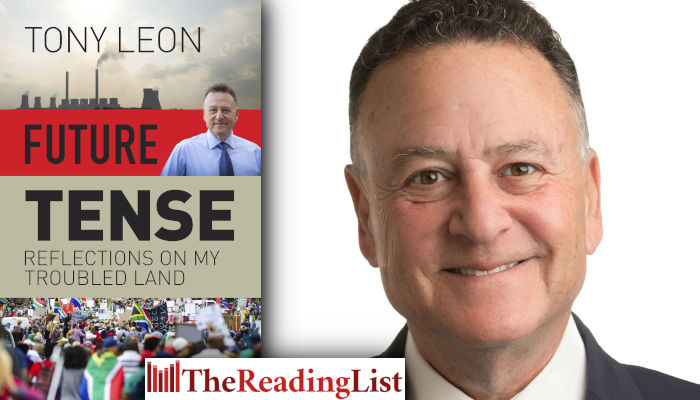 Future Tense: Reflections on My Troubled Land by Tony Leon is out in March from Jonathan Ball Publishers.

‘From the vantage point of years in active politics, Tony Leon provides a lucid analytical balance sheet of SA Ltd 2021. Eschewing political correctness Leon tells it as he sees it.’ – Judge Dennis Davis

‘Anyone who wants to understand South Africa today – a country so beautiful, yet so broken – simply has to read this book.’ – Niall Ferguson, author of The Ascent of Money and Civilization: The West and the Rest

‘Even his political opponents must confront Tony Leon’s jarring questions about whether South Africa can be rescued from corruption, cronyism and continued economic decline.’ – Lord Peter Hain

In his riveting new book, Future Tense, Tony Leon captures and analyses recent South African history, with a focus on the squandered and corrupted years of the past decade.

With unique access and penetrating insight, Leon presents a portrait of today’s South Africa and prospects for its future, based on his political involvement over 30 years with the key power players: Cyril Ramaphosa, Jacob Zuma, Thabo Mbeki, Nelson Mandela and FW de Klerk. His close-up and personal view of these presidents and their history-making, and many encounters in the wider world, adds vivid colour of a country and a planet in upheaval.

Written during the first coronavirus lockdown, Future Tense examines the surge of the disease and the response, both of which have crashed the economy and its future prospects.

As the founding leader of the Democratic Alliance, Leon also provides an insider view for the first time of the power struggles within that party, which saw the exit of its first black leader in 2019.

There is every reason to fear for the future of South Africa but, as Leon argues, ‘the hope for a better country remains an improbable, but not an impossible, dream’.

Tony Leon is the author of five books and is the longest serving leader of the Official Opposition in the Parliament of South Africa since the advent of democracy. He served afterward as South African Ambassador to Argentina, Uruguay and Paraguay. A qualified attorney and Constitutional Law lecturer, Leon served for 20 years as Member of Parliament and played a leading role in the constitutional negotiations which birthed modern South Africa. He is chairman of Resolve Communications and lives in Cape Town.