New book alert! Elevator Pitch by Linwood Barclay – one of the finest thriller writers in the world at the very top of his game
More about the book! 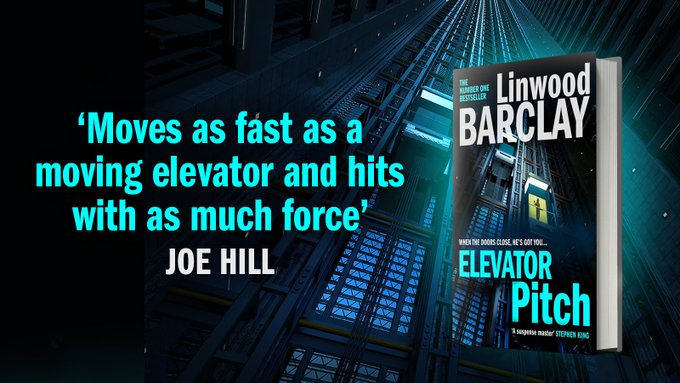 It begins on a Monday, when four people board an elevator in Manhattan. Each presses the button for their floor, but the elevator climbs, non-stop, to the top where it pauses for a few seconds, before dropping.

Right to the bottom of the shaft.

It appears to be a horrific, random tragedy. But then, on Tuesday, it happens again. And when Wednesday brings yet another catastrophe, New York, one of the most vertical cities in the world is plunged into chaos.

Clearly, this is anything but random. This is a cold, calculated bid to terrorise the city. And it’s working. But what do these deadly acts of sabotage have to do with the fingerless body found on the High Line?

It will be a race against time for detectives Jerry Borque and Lois Delgado to find the answers before a deadly Friday night showdown.

Linwood Barclay is an international bestselling crime and thriller author with over 20 critically acclaimed novels to his name, including the phenomenal number one bestseller No Time For Goodbye. Every Linwood Barclay book is a masterclass in characterisation, plot and the killer twist, and with sales of over 7 million copies globally, his books have been sold in more than 39 countries around the world and he can count Stephen King, Shari Lapena and Peter James among his many fans. Many of his books have been optioned for film and TV, and Linwood wrote the screenplay for the film based on his bestselling novel Never Saw It Coming. He is currently working with eOne to turn the Promise Falls trilogy into a series. Born in the United States, his parents moved to Canada just as he was turning four, and he’s lived there ever since. He lives in Toronto with his wife, Neetha. They have two grown children.