New 40th anniversary edition of Steve Biko’s I Write What I Like
More about the book! 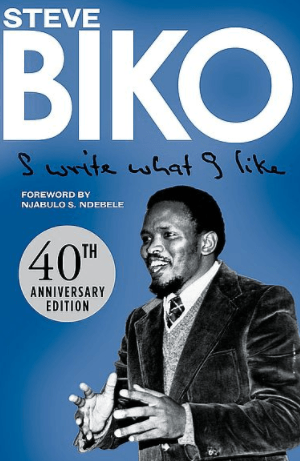 I Write What I Like features the writing of the famous activist and Black Consciousness leader Steve Biko. Before his untimely death in detention at age 30, he was instrumental in uniting Black Africans in the struggle against the apartheid government in South Africa.

In addition, it features all the material of the original Picador Africa edition: a collection of Biko’s columns entitled I Write What I Like published in the journal of the South Africa Student Organisation under the pseudonym of ‘Frank Talk’; other journal articles, interviews and letters written by Steve Biko at the time; an Introduction by Nkosinathi Biko; a preface by Archbishop Desmond Tutu; and a moving memoir by Father Aelred Stubbs, which pays tribute to the courage and power of this young leader, who was to become one of Africa’s heroes.