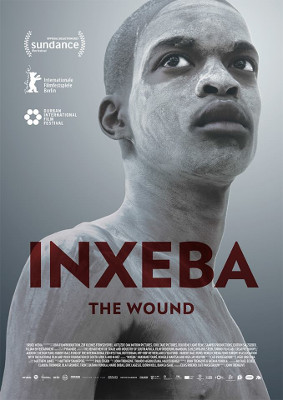 Nakhane Touré won the Best Actor award at the prestigious Durban International Film Festival (DIFF) over the weekend for his role in the critically acclaimed gay isiXhosa film Inxeba‚ also known as The Wound.

The film, which tells the story of the Xhosa initiation ritual and the intimate relationship that develops between three men undergoing the ceremony, premiered at the Sundance Film Festival and has received massive international recognition. It had its African premiere at The Playhouse in Durban during the festival.

The film’s director John Trengrove, who won the Best Director Award, said. ‘I am so grateful to the incredible cast and crew who put their faith and trust in this journey. This film is a testament to their efforts. I want to dedicate this award to the silent and faceless queers throughout the African continent who face insurmountable obstacles every day in a struggle for identity and dignity.’

Actor, musician and author Nakhane – whose debut novel Piggy Boy’s Blues was released in 2015 – is currently recording his second album in Europe. He is not the only literary link in the film, as it was co-written by Thando Mgqolozana, the premise being inspired by his 2009 novel A Man Who is Not A Man.

Nakhane uploaded a video on Facebook after hearing the news of his award – in the bath:

Don’t miss the launch of Running Wild: The Story of Zulu, an African Stallion by David Bristow at Skoobs