Miracle Men: How Rassie’s Springboks won the World Cup – The thrilling journey of a team that went from no-hopers to world champions 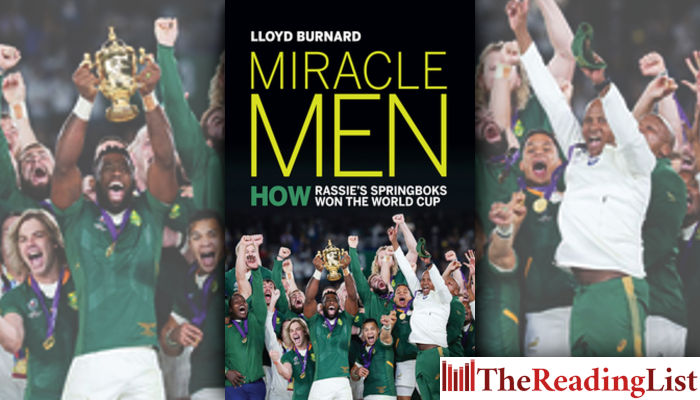 Miracle Men: How Rassie’s Springboks won the World Cup by Lloyd Burnard is out now from Jonathan Ball Publishers.

When Rassie Erasmus took over as coach of the Springboks in 2018, few thought they had a chance of winning the Rugby World Cup. The Boks had slipped to seventh in the world rankings and lost the faith of the rugby-loving public. Less than two years later, jubilant crowds lined the streets of South Africa’s cities to welcome back the victorious team.

Sportswriter Lloyd Burnard takes the reader on the thrilling journey of a team that went from no-hopers to world champions. He examines how exactly this turnaround was achieved. Interviews with players, coaches and support staff reveal how the principles of inclusion, openness and focus, as well as careful planning and superb physical conditioning, became the basis for a winning formula. The key roles played by Rassie Erasmus and Siya Kolisi shine through.

There were ups and downs along the way: beating the All Blacks in Wellington during the Rugby Championship was a high point, but then came Kolisi’s injury, while in Japan the distractions of a volatile support base sometimes shook the players’ focus.

Miracle Men is filled with marvellous anecdotes and sharp insights. It is also inspiring testimony to what can be achieved when a group of South Africans from all backgrounds come together as a team.

Lloyd Burnard has worked as a journalist for more than a decade. He is a former sports editor of The Witness newspaper in KwaZulu-Natal and currently an award-winning senior journalist at Sport24. He has been covering the Springboks extensively since 2015, culminating in their 2019 Rugby World Cup triumph, and has reported on numerous other major sporting events including the 2010 Fifa World Cup, the 2016 Olympic Games in Rio de Janeiro and the 2019 Cricket World Cup in England. This is his first book.