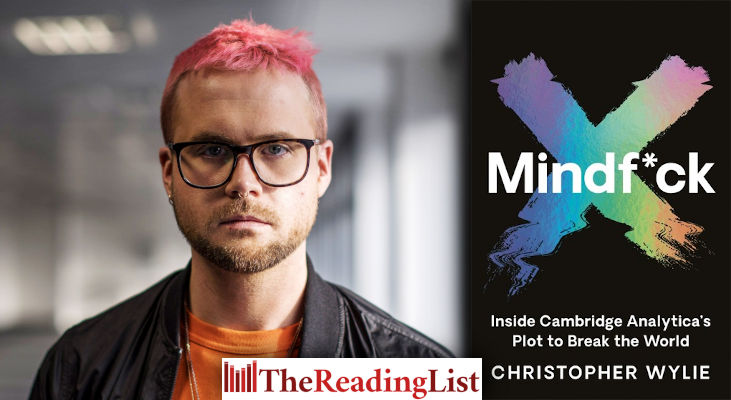 From whistleblower Christopher Wylie, the definitive story of the Brexit coup, the making of Bannon’s America, and an ongoing crime against democracy.

On 8 October, 2019, Mindf*ck: Inside Cambridge Analytica’s Plot to Break the World by Christopher Wylie will be released worldwide.

The book will be available in South Africa through Jonathan Ball Publishers.

For the first time, Wylie, the Cambridge Analytica whistleblower, tells the inside story of the data mining and psychological manipulation behind the election of Donald Trump and the Brexit referendum, connecting Facebook, WikiLeaks, Russian intelligence, and international hackers.

Wylie’s decision to become a whistleblower prompted the largest data crime investigation in history. His story is both exposé and dire warning about a sudden problem born of very new and powerful capabilities. It has not only exposed the profound vulnerabilities and profound carelessness in the enormous companies that drive the attention economy, it has also exposed the profound vulnerabilities of democracy itself.

What happened in 2016 was just a trial run. Ruthless actors are coming for your data, and they want to control what you think.

‘I thought I knew the Cambridge Analytica story backwards but reading Mindf*ck felt like having the lights switched on. There aren’t many people who understand the new landscape of political control like Christopher Wylie, and perhaps none who are willing to go on the record.

‘Mindf*ck is an astonishing journey through the underworlds of modern power, lit up with savage humour and guided by a steely sense of purpose. Amid talk of riots on the streets, this is the riot we need.’

Wylie has been called ‘the millennials’ first great whistleblower’ by The Guardian and ‘a pink-haired, nose-ringed oracle sent from the future’ by The New York Times. He is known for his role in setting up – and then taking down – Cambridge Analytica. His revelations exposing the rampant misuse of data rocked Silicon Valley and led to some of the largest multinational investigations into data crime ever. Born in British Columbia, Canada, he studied law at the London School of Economics before moving into cultural data science and fashion trend forecasting. He lives in London, England.

In 2016, an obscure British military contractor turned the world upside down. Funded by a billionaire on a crusade to start his own far-right insurgency, Cambridge Analytica combined psychological research with private Facebook data to make an invisible weapon with the power to change what voters perceived as real.

The firm was created to launch the then unknown Steve Bannon’s ideological assault on America. But as it honed its dark arts in elections from Trinidad to Nigeria, 24-year-old research director Christopher Wylie began to see what he and his colleagues were unleashing.

He had heard the disturbing visions of the investors. He saw what CEO Alexander Nix did behind closed doors. When Britain shocked the world by voting to leave the EU, Wylie realised it was time to expose his old associates. The political crime of the century had just taken place – the weapon had been tested – and nobody knew.

Read the opening chapter of The Woman in the Wood, the latest novel from Lesley Pearse

An electric debut novel: If I Stay Right Here by Chwayita Ngamlana